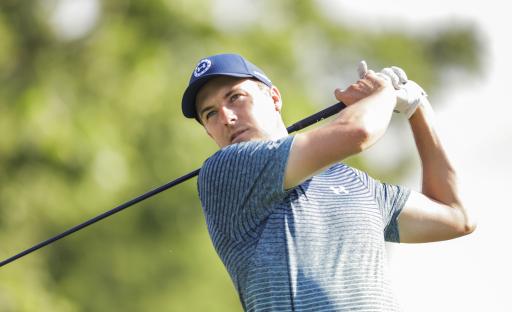 Spieth, a native of Dallas, posted a bogey-free, 7-under-par 63 and is tied for the lead with Sergio Garcia of Spain after the first round of the Charles Schwab Challenge at Colonial Country Club in Fort Worth, Texas.

Colonial is hosting the event, which started out as the Colonial National Invitational in 1946, for a PGA Tour record 75th consecutive year.

“It’s hard to go any lower,” said Spieth, who won at Colonial in 2016 and captured the Valero Texas Open early last month. “I made some putts, got started on the first hole today, that one goes in, and that’s what I talked about before the tournament.

“If I could get a couple to go in early in the first round and the confidence and the work I’ve been doing on my stroke the last few days—which is a somewhat significant change in a stroke feel. … I thought that would exude just a little bit of confidence into the rest of the round on greens where I’ve been very successful on before.”

Spieth, who has 12 PGA Tour victories including three major titles, made three birdies while starting on the back nine before collecting four more coming home on the front, including a 71-foot chip-in at No. 8 for the middle one of three in a row.

Garcia matched Spieth’s bogey-free 63, collecting five birdies and holing a brilliant 63-foot shot from a greenside bunker for an eagle-3 at No. 11. His 14-foot birdie putt on the 18th hole to take the sole possession of the lead lipped out.

“Obviously, it was a great day,” said Garcia, who has claimed two of his 11 PGA Tour victories at Colonial in 2001 and 2016. “I hit a lot of nice shots and a couple things went my way, too. Things were going well, so I just kept going and have to do the same tomorrow.

“I had missed some cuts (four in a row) coming into this week, but I didn’t feel like I was playing that bad. Just a missed shot here and there, and I hit a lot of good putts that just lipped out instead of going in. But I’m excited about the way I played today.”

Erik Compton, who has returned to play on the PGA Tour after two heart transplants, carded a bogey-free 65 and is tied for third with Jason Kokrak, who had three bogeys on each nine and a single bogey at No. 13.

Brandt Snedeker, who finished second at Colonial in 2015, made five birdies on his last 10 holes to shoot 66 and is tied for fifth with Adam Hadwin of Canada, who birdied three of the first six holes and sank a 39-foot birdie putt at No. 16, and Kramer Hickok, who was bogey-free until his only hiccup on the 15th hole.

Cameron Tringale carded a bogey-free 67 and is tied for eighth with Talor Gooch, who birdied his last four holes, Patton Kizzire, Robert Streb, Sebastian Munoz of Colombia and Byeong-Hun An of South Korea.

Eighth-ranked Patrick Reed shot 68 and is in a tie for 14th that includes defending champion Daniel Berger, and fifth-ranked Collin Morikawa of La Canada Flintridge and Cal, who lost to Berger in a playoff at Colonial last year, is tied for 24th at 69.

Second-ranked Justin Thomas shot 72 and is tied for 69th, while 50-year-old Phil Mickelson, a two-time winner at Colonial who is coming off his sixth major victory in the 103rd PGA Championship, is tied for 87th at 73.