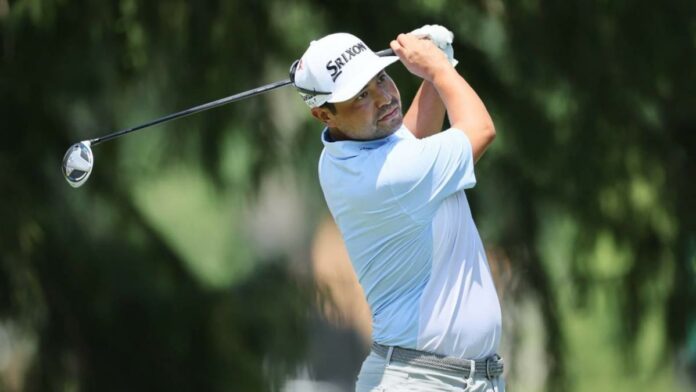 J.J. Spaun didn’t win on the PGA Tour until earlier this year and he’s put himself in position to make a run at another title in a much bigger tournament.

The 31-year-old Spaun shot 3-under-par 67 to take a one-stroke lead over Sepp Straka of Austria and Troy Merritt midway through the FedEx St. Jude Championship, the first event of the playoffs, at TPC Southwind in Memphis, Tenn.

Players in the top 70 of the FedEx Cup point standings when the tournament ends on Sunday will advance to the BMW Championship next week at Wilmington Country Club in Wilmington, Del., and the best 30 after that will qualify for the season-ending Tour Championship the following week at East Lake Country Club in Atlanta.

“If you shoot 3-under compared to yesterday, you’re getting lapped, right?” said Spaun, who won the Valero Texas Open in April. “But the wind came up and made the course play tougher. Today, 3-under was pretty solid. It was important for me to keep an eye on that and not let myself get too ahead of myself. I think I did a good job of that.

“This is the first time I’ve played (TPC Southwind) and I like it so far. It’s been good to me and it seems to suit my game.”

Spaun, who was tied for the lead after an opening 62, put himself alone atop of the  leaderboard with a 13-foot birdie putt from the fringe of his 17th hole in round two, No. 8, before sinking a clutch seven-footer for par at No. 9 to finish 36 holes at 11-under 129.

Merritt, whose ties for fourth at Pebble Beach and in the Valero Texas Open are his best results on the PGA Tour this season, holed a 15-foot putt for eagle on the 16th hole to highlight a 65, while Straka, who missed the cut in his last six starts, birdied four of the last five holes for a 66.

“My game has been up-and-down the last few weeks,” said Merritt, who has won twice on the PGA Tour, the last time in the 2018 Barbasol Championship. “I was driving the ball well, but couldn’t make a putt outside of three feet. Then, this week, my ball-striking has been OK, even though I’ve been hitting it left and then right, but I’ve been making a lot of putts. It’s just a funny game.

“I’ve never been close to making it all the way to the Tour Championship, but now I just need a solid weekend to stay in good position to lock up a spot at East Lake. Just to get there would make this a special year, but once that happens it would be a bonus to put myself in a position to win.”

Said Straka, who won the Honda Classic earlier this season, when asked if he let all those missed cuts affect him: “You can’t afford to do that out here. The margins are so small, if you miss some fairways, now you’re starting to play for pars and you can’t really do that out here. You’ve just got to remind yourself that any one thing can kind of change it the other way. You’ve really got to take it one shot at a time, whether it’s going good or bad, and you’ve just got to try to remind yourself of that as much as you can.”

Denny McCarthy had three early birdies and then holed his second from 167 yards for an eagle at No. 6 en route to a 65 and is two shots back in solo fourth while second-ranked Cameron Smith of Australia, who won the Open Championship at St. Andrews in his last start, sank a 15-foot eagle putt at No. 16 in a 65 and is three down in a tie for fifth with Tony Finau, winner of his last two events and defending champion in the playoff opener, Brian Harmon, who shot a second 66, and Ryan Palmer, who finished at 67.

Tyler Duncan, who equaled the low round of the day with a bogey-free 63, is four strokes behind in a large tie for ninth with Kevin Kisner (64), Emiliano Grillo of Argentina (66), Adam Scott of Australia (67), Trey Mullinax (67), Lucas Glover (68), K.H. Lee of South Korea (69) and rookie Sahith Theegala of Chino Hills and Pepperdine (70).

Seventh-ranked Justin Thomas carded a second straight 67 and is in a tie for 17th that includes 10th-ranked Matt Fitzpatrick of England, who shot 66, 11th-ranked Sam Burns, who had a 69, 2020-21 PGA Tour Rookie of the Year Will Zalatoris, who posted a bogey-free 63 that equaled the low score of the round, and rookie Maverick McNealy of Stanford, who had a bogey-free 67.

Third-ranked Patrick Cantlay of Los Alamitos and UCLA is tied for 27th after a 68, fifth-seeded Xander Schauffele of La Jolla and San Diego State had a second 68 and is in a tie for 33rd with sixth-seeded Jon Rahm of Spain, who finished at 69, and eighth-seeded Collin Morikawa of La Canada Flintridge and Cal, who wound up at 69, while ninth-seeded Viktor Hovland of Norway came in at 70 and is tied for 46th.

Top-ranked Scottie Scheffler, the FedEx Cup points leader, finished at 71-68—139, and missed the cut by one stroke along with third-seeded Rory McIlroy of Northern Ireland, who finished at 70-69—139, and former world No. 1 Jason Day of Australia, who wound up at 65-74—139.