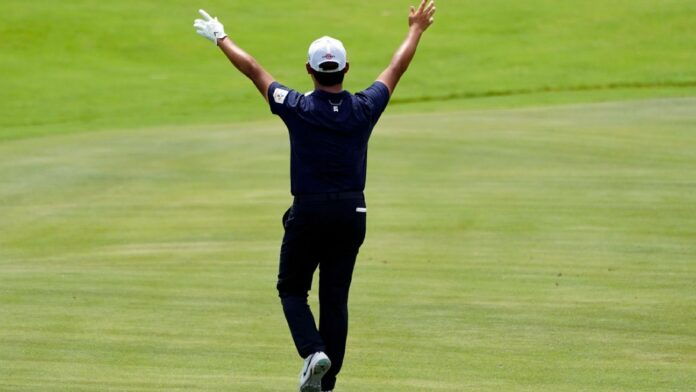 Si Woo Kim of South Korea finished his day on the golf course with a walk-off.

The 27-year-old Kim (pictured) holed his second shot from 167 yards for an eagle at No. 18 to cap an 8-under-par 62 and is tied for the lead with J.J. Spaun of Los Angeles and San Diego State after the first round of the FedEx St. Jude Championship in hot, steamy weather at TPC Southwind in Memphis, Tenn.

The top 125 players in the FedEx Cup point standings qualified for the first event of the playoffs, although five are not playing because of injuries, with the top 70 after this week advancing to the BMW Championship next week at Wilmington Country Club in Wilmington, Del..

The top 30 after the BMW will qualify for the season-ending Tour Championship a week later at East Lake Golf Club in Atlanta that determines the 2021-22 FedEx Cup champion.

“I was just trying to hit the ball like 10 feet on left side and it was just perfect shot,” said Kim, who withdrew from the Wyndham Championship last week because of an illness, of his closing shot with an 8-iron.

“I had a great start, but then I was struggling a little with my putting and so I just decided to change the putting grip and it made me feel more comfortable with the putter. I think that’s why I made a couple putts early on the back nine and I got some confidence, and kept going through. The change really paid off and the putts really started going in on the back nine.”

Kim, who won the 2017 Players Championship and has three PGA Tour victories, made his only bogey at No. 4 following two straight birdies, but reeled off five birdies to go with his eagle coming home to shoot 7-under 28 on the back nine.

Spaun, 31, who won the Valero Texas Open earlier this season for his initial PGA Tour victory to qualify for his first Masters where he tied for 23rd, birdied the first two holes before adding another birdie at No. 9 and made five more birdies on the back nine en route to a bogey-free 62.

“It will be nice to punch another ticket (to the Masters) and be able to plan it out and get down Sunday, maybe even Saturday the week before, take my time and enjoy all the little things that come along with that great tradition,” said Spaun, who also won once each on the Korn Ferry Tour and the PGA Tour Canada. “Hopefully, I can keep playing well this week and the next couple of weeks, and I’ll be there again.

“I’m hot, figuratively and literally, I guess. I think I putted really well and I drove it really well. I guess I hit 15 out of 18 greens. So that’s a pretty good combo. When you’re hitting a lot of greens and putting well and hitting fairways, it’s hard to complain about how I played today.”

Rookie Sahith Theegala of Chino Hills and Pepperdine had four birdies on the front nine and three more on the back in a bogey-free 63 that left him one stroke back in solo third.

Said Theegala: “I haven’t been driving the ball very well for about the last three weeks, so I have been working on it lately and really drove the ball well today. Then the putts started going in, long ones and short ones, from wherever.”

Rickie Fowler of Murrieta, the last player to qualify for the FedEx Cup Playoffs at No. 125 in the point standings, sank a six-foot eagle putt at No. 16 in a 65 and is in a big tie for eighth with 11th-ranked Sam Burns, who had six birdies; former world No. 1 Jason Day of Australia, who played bogey-free; James Hahn of Alameda and Cal, who also played bogey-free; 2009 U.S. Open Champion Lucas Glover, who made five birdies on his front nine; Tyrrell Hatton of England, who also was bogey-free; Troy Merritt, who had three birdies on each nine; Ryan Palmer, who sank an eight-foot eagle putt at No. 3 and had four birdies coming home; Lee Hodges, who birdied the first three holes, and Michael Thompson, who made four birdies while finishing on the front nine.

Second-ranked Cameron Smith of Australia, who won the Open Championship at St. Andrews in July but has yet to confirm or deny stories that he is headed for LIV Golf, shot 67 while holing a 156-yard shot for an eagle on the 13th hole and is in a tie for 30th that includes seventh-ranked Justin Thomas, who birdied his last hole, and eighth-ranked Viktor Hovland of Norway, who played bogey-free.

Also in the tie for 30th at 67 are fourth-ranked Patrick Cantlay of Los Alamitos and UCLA, who birdied four of the first six holes, sixth-ranked Jon Rahm of Spain, who birdied three of the last four, and eighth-ranked Collin Morikawa of La Canada Flintridge and Cal, who had four birdies on the first seven holes of the back nine.

Fifth-ranked Xander Schauffele of La Jolla and San Diego State, the 2021 Olympic Gold Medalist, totaled 68 and is in a tie for 49th that includes Matt Fitzpatrick of England, who won the U.S. Open at The Country Club in Brookline, Mass., while third-ranked Rory McIlroy of Northern Ireland is tied for 77th at 70, and top-ranked Scottie Scheffler shot 71 and is tied for 86th.