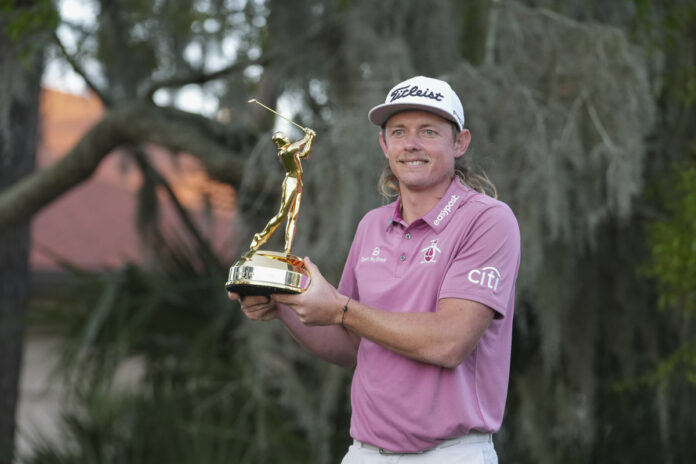 Cameron Smith made like fellow Aussie Adam Scott when he won on the Stadium Course at TPC Sawgrass in 2004, hitting the ball into the water on the final hole, but then sinking a bogey putt to win the 48th Players Championship.

The 28-year-old Smith closed with a 6-under-par 66, needing only 24 putts to hold off 54-hole leader Anirban Lahiri by one stroke in a manic Monday finished caused by several rain delays the first three days in Ponte Vedra Beach, Fla.

“It’s just huge to win this tournament and I think it will take a while to really sink in,” said Smith, who claimed his second PGA Tour victory of the season, fifth overall and the seventh of his pro career. “It’s cool to win here because I live in Jacksonville now and there were a lot of fans out there rooting for me today on a Monday and that was great.

“This was the next step for me, to win a big tournament like this one. I hit a lot of quality golf shots and made a lot of putts for birdies, and some big ones near the end for pars, and then the last one for bogey. There are some tricky putts around here, but you get to know them once you play this course enough.

“It was unreal to have my mom and my sister here from Australia because I hadn’t seen them in 2½ years (because of Coronavirus pandemic travel restrictions. It was just great to hug them and win this tournament for them.”

Smith, who will rise from 10th to sixth in the World Golf Rankings and to second in the FedEx Cup point standings, was tied for sixth to start the day, but birdied the first four holes and five of the first six to climb the leaderboard before falling back with bogeys on the last three holes of the front nine.

However, he birdied the first four holes on the back nine and hit his tee shot on the famed 17th hole with the island green to within four feet to set up his final birdie that gave him a three-stroke lead, and after the bogey at No. 18 he posted a score of 13-under 275.

Smith needed only one putt on eight of the last nine greens and one-putted 13-of-18 greens in joining Scott, Greg Norman, Steve Elkington and Jason Day as Australians to win the Players Championship.

Lahiri, 34, who has won 18 times around the world but never on the PGA Tour, made a costly double-bogey 5 on the eighth hole, but also sank a 14-foot eagle putt at No. 11 and had three birdies in his 69.

“I’ve been struggling for a while, so my only goal coming into the week was to play well, so it was a successful week for me even though I’m disappointed not to win,” said Lahiri, who has missed the cut seven times on the PGA Tour this season. “I was surprised by how calm I was today and I hit a lot of good shots and putts. I made some mistakes, too, but that’s golf.

“I’ve been working on my state of mind and having a good process on the course for the last few weeks, and that really helped me out there this week. It’s been a long time since I played like this and been in this position.

“But I’ve been on this tour for seven years and haven’t won, and I want to get that monkey off my back.”

Paul Casey of England shot a third straight 69 and was two strokes back in third, followed one more back by Kevin Kisner, who made three late birdies in a 68, while Keegan Bradley finished bogey-double bogey and was four shots behind in fifth.

Third-ranked Viktor Hovland of Norway finished at 69 to wind up six strokes back in a tie for ninth with ninth-ranked Dustin Johnson, who holed out from 67 yards for an eagle at No. 9 to cap a 63 that was low score of the day, Sepp Straka of Austria (67) and Adam Hadwin of Canada (67).

Sixth-ranked Rory McIlroy of Northern Ireland eagled the 11th hole in a bogey-free 66 to finish in a tie for 33rd that included eighth-ranked Justin Thomas, the defending Players champion, while top-ranked Jon Rahm of Spain hit into the water twice to make a 9 on the par-4 fourth hole in a 77 and wound up in a tie for 55th that included fifth-ranked Scottie Scheffler, who made three late bogeys in a 76.