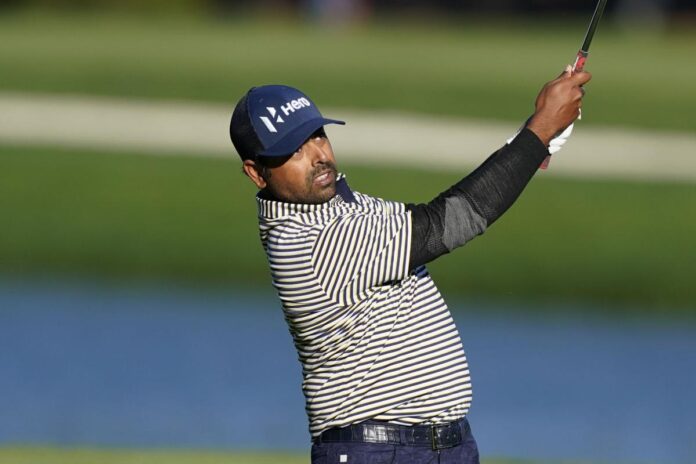 Anirban Lahiri of India was 18 victories around the world, but none on the PGA Tour, but now he is in position to possibly win one of the biggest events.

The 34-year-old Lahiri tapped in for an eagle on the 11th hole as darkness halted play in the third round to take a one-stroke lead over Harold Varner III and Tom Hoge in the rain-delayed 48th Players Championship on the Stadium Course at TPC Sawgrass in Ponte Vedra Beach, Fla.

Tournament officials were able to get in full day of golf for the first time since the tournament began on Thursday, but none of the 71 players who made the cut finished the third round. They will return Monday morning to complete their rounds before playing the final round.

Because of Daylight Savings Time, they should be able to get it all in, unless there is a playoff, which appears to be very possible looking at packed top of the leaderboard.

“It was nice to get back into a good process and a good rhythm,” said Lahiri, who has missed the cut seven times on the PGA Tour this season. “Made a lot of good swings today, just kept it in front of me, made good decisions. Yeah, it was a good day.

“I have a lot more confidence in my game, I’m trusting my swing and my club selection, just started out well and kept on going. I have no expectations for tomorrow, except that I want to keep on doing what I have been doing and have another good day.”

Lahiri, who has won 12 times in India and twice on what is now the DP World Tour, opened with 67-73, made five birdies on the front nine and six in all against one bogey in round three before the horn blew.

Varner finished the day with a tap-in birdie on the ninth hole after opening with 69-69 and is one shot back in a tie for second with Hoge, who has been or near the lead since opening with scores of 66-71.

“It was a good day and we did as much as we could do,” said Varner, who won the 2016 Australian PGA Championship and the Saudi International last month. “It was a nice way to finish with a birdie on the last hole heading into tomorrow.

“I’ve been working really hard and I can only control what I do, and it’s going to be another long day, but I’m hoping for another good day tomorrow.”

Said Hoge, who claimed his first PGA Tour victory last month at Pebble Beach and opened with 66-71 before making a birdie No. 9 before darkness came: “I just tried to hit a lot of fairways and greens. I managed it very well. But it was a solid day for me, and hopefully I keep that going.”

Second-ranked Collin Morikawa of La Canada Flintridge and Cal shot 73-75—148 to miss the cut by two strokes, fourth-ranked Patrick Cantlay of Los Alamitos totaled 72-77—149 to miss by three, and seventh-ranked Xander Schauffele of La Jolla and San Diego State wound up at 73-78—151 to miss the weekend by five shots.

Shane Lowry of Ireland hit the shot of the day when he made a hole in one on the famed 17th hole with the island green from 123 yards and is in a tie for 11th at 5-under.