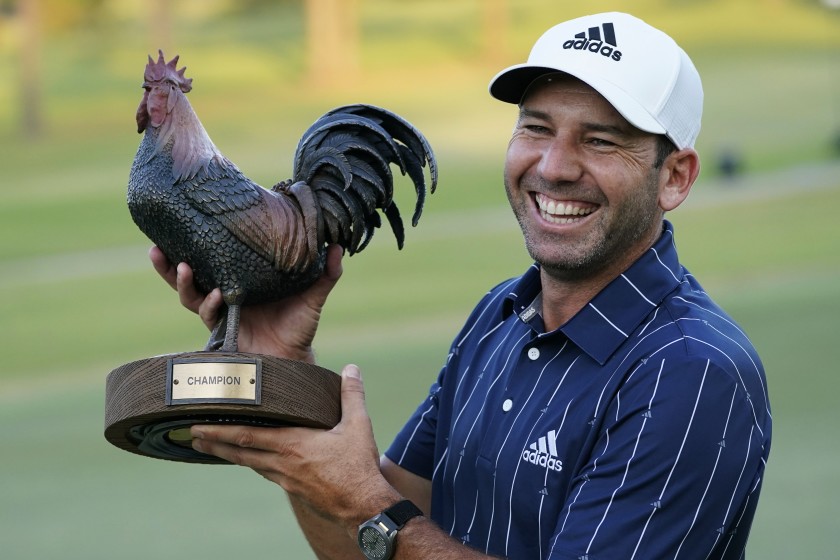 Former boy wonder Sergio Garcia is 40-years-old now and has been in a bit of a slump, but in the final round of the Sanderson Farms Championship he played like the kid they called El Nino.

Garcia hit two great shots on the final hole to set up a three-foot birdie putt to cap a 5-under-par 67 and claim a one-stroke victory over Peter Malnati at the Country Club of Jackson in Jackson, Miss.

“It’s pretty sweet,” said Garcia, who claimed his 36th pro victory and 11th on the PGA Tour, but the first since the 2017 Masters. “I’ve won a couple times in Europe (in the last two years), but it’s nice to win over here again.

“It’s been a little bit of a struggle and it was a little tough, but I found some things lately and got back on track. I just had to get my mind straight and I just kept working hard and believing in myself. It was great on 18, like a nice dream.

“It’s been tough because I lost two uncles because of Covid-19 and that’s been hard on my dad. This is amazing and it’s for my whole family back in Spain.”

Garcia, who had fallen to No. 51 in the World Golf Rankings and out of the top 50 for the first time since 2011, made three birdies on the front nine to offset two bogeys and sank a three-foot eagle putt after a brilliant approach from 260 yards on No. 14 en route to a score of 19-under 269.

Malnati, whose only PGA Tour victory came in the 2015 Sanderson Farms, posted a bogey-free 63 and finished more than an hour ahead of the other leaders before finally learning that he would not be in a playoff.

J.T. Poston was three shots back in solo third after a 70, while Henrik Norlander of Sweden made a 38-foot eagle putt on the third hole and chipped in from 60 feet for another eagle at No. 15 in a 65 that left him one more back in a tie for fourth with 2011 PGA champion Keegan Bradley, who holed out from 59 yards for an eagle at No. 11.

Charley Hoffman of Poway and UNLV, who shared the first-round lead at 64, closed with a 69 to wind up four strokes behind in a tie for sixth with Scott Stallings (67), Tyler McCumber (69), Denny McCarthy (70), Kristoffer Ventura (71) of Denmark and Cameron Davis (72) of Australia.

Defending champion Sebastian Munoz of Colombia tied for 23rd after a 71.