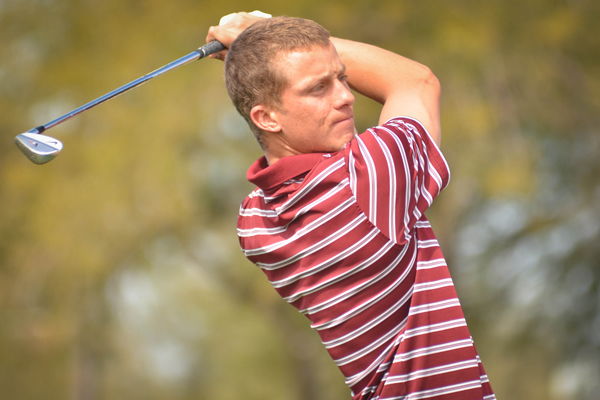 Scott Pinckney, a 2011 Arizona State University graduate, shot 7-under-par 65 on the Nicklaus Tournament Course at PGA West in La Quinta to take a one-stroke lead over Jimmy Gunn of Scotland after four of six rounds in the Web.com Tour Qualifying Tournament.

Pinckney, whose best finish on a major tour as a pro was a tie for seventh in the 2012 Kazakhstan Open on the European Tour, bounced back from a bogey on the second hole to record eight birdies, including six in a span of seven holes through No. 17.

Gunn, who has bounced around the mini-tours in the United States since leaving Royal Dornoch Golf Club a few years ago, carded six birdies and an eagle through 12 holes before finishing with six consecutive pars.

Third-round leader Steve Saunders, a former All-American at the University of New Mexico, was two strokes back in third after a 70, followed two strokes further back by Andy Pope of Xavier University, who had a 66.

Max Homa of Valencia, the 2013 NCAA individual champion at Cal, shot 69, and was tied for fifth with long-hitting Tony Finau of Lehl, Utah, who had a 68.

Amateur Michael Kim of Del Mar, the 2013 NCAA Player of the Year at Cal, posted a 70 and was tied for seventh. Kim has said he will wait to see where he finishes before deciding whether to turn pro or return to Cal to finish his junior season.

The winner of the tournament receives a full exemption for the 2014 season on the Web.com Tour, while all 152 players in the event receive some playing status for next year by virtue of making it to the finals.