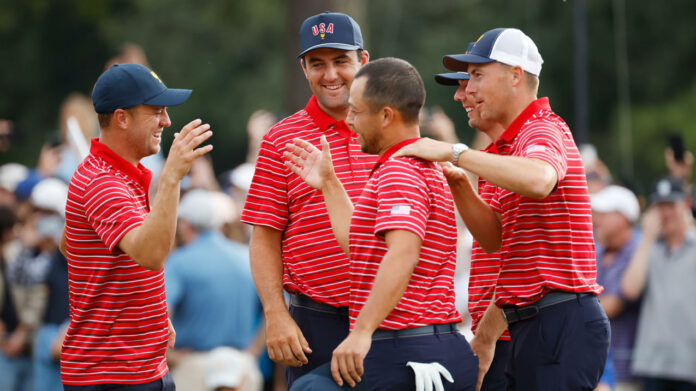 Being a heavy favorite against a solid opponent isn’t always easy, but the United States bounced back after the International Team rallied on Saturday to close the gap in the 14th Presidents Cup.

The Americans won or halved five of the first seven singles matches on Sunday to claim the Presidents Cup for the ninth consecutive time in the biennial event.

Xander Schauffele, the 2021 Olympic Gold Medalist from La Jolla and San Diego State provided the Americans with the winning point when he sank a short par putt on the 18th hole claim a 1-up victory over Corey Conners of Canada to make it 15.5-9.5 with five matches still in progress.

“This is a really strange feeling,” said Schauffele, pictured center. “Man, we were struggling out there, and I’m really happy there are no pictures on the scorecard. I had all the boys pulling for me. I knew it was going to be close. Corey just let me in, and I was able to take advantage of it.”

Earlier, Jordan Spieth put the first point of the day on the board when he defeated Cam Davis of Australia, one of the International’s heroes on Saturday, 4 and 3. Spieth had been 0-6-1 in previous singles matches in the Presidents Cup and Ryder Cup, but he was the star of this week for the Americans with a 5-0 record.

“I had a great back nine,” said Spieth, who became the sixth player to go 5-0 in the Presidents Cup. “I rattled off three straight birdies (starting at 11) and then just kept trying to hit greens. It feels really good.

“I was more nervous than I probably should have been today, just because I wanted to get that (winless singles) monkey off my back.”

Patrick Cantlay of Los Alamitos and UCLA built a 3-up lead over Adam Scott of Australia and never trailed in a 3-and-2 victory, while Max Homa of Valencia and Cal erased a 3-down deficit after 11 holes and pulled out a 1-up win over 20-year-old rising star Tom Kim of South Korea.

Collin Morikawa of La Canada Flintridge and Cal never trailed and built a 4-up lead after 10 holes on his way to a  3-and-2 victory over Mito Pereira of Chile, and Tony Finau won four of the last six holes to beat Taylor Pendrith of Canada, also by 3 and 2.

“I fought as hard as I think I’ve ever fought in a match,” said Finau, who went 3-1 this week. “We know what’s on the line here this week, and it just adds that little intensity. I needed every bit of it. I played really nicely. I had to if I was going to beat Taylor today.”

Justin Thomas, who went 4-0 playing alongside Spieth in foursomes and fourball matches on the first three days, also had a chance to go 5-0, but Si Woo Kim of South Korea made a 10-foot birdie putt on the last hole to claim a 1-up victory when Thomas missed from the same distance.

Sebastian Munoz of Colombia claimed a 2-and-1 victory over top-ranked Scottie Scheffler, Sungjae Im of South Korea beat Cameron Young, 1 up, K.H. Lee of South Korea downed Bill Horschel, 3 and 1, and Christiaan Bezuidenhout of South Africa defeated Kevin Kisner, 2 and 1, for the other International victories.

Hideki Matsuyama of Japan won the 16th hole to pull even with Sam Burns in the only match of the 12 that was halved.For complete results, visit https://www.presidentscup.com/leaderboard.html