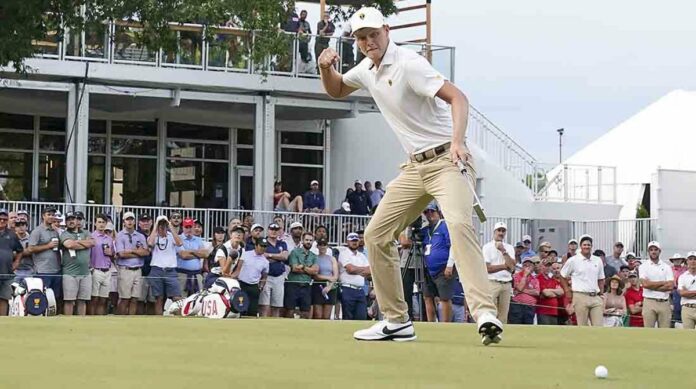 The International Team rallied on Saturday to prevent another United States runaway in the 14th Presidents Cup.

Captain Trevor Immelman’s Internationals won three of the four fourball matches in the afternoon after splitting the four foursome matches in the morning to cut the Americans’ lead to 11-7 heading to the final day at Quail Hollow Club in Charlotte, N.C.

Still, the U.S. holds an 11-1-1 lead in the series and needs only 4½ points in the 12 singles matches on Sunday to retain possession of the Presidents Cup.

“I challenged these guys this morning to win the day, and they did, by a score of 5-3,” said Immelman, who is from South Africa. “I’m so proud of these guys because they’ve battled so hard all this week against a strong American team.

“We still have a long way to go, trailing by four points, and the Americans are very strong in singles. But we finally started seeing some putts to in today and took advantage of that to get some great wins.

Cam Davis (pictured) sank a nine-foot birdie putt on the 18th hole to cap the rally, teaming with fellow Australian Adam Scott for a 1-up victory over Sam Burns and Billy Horschel.

Burns and Horschel held a 1-up lead through 16 holes before Davis incredibly finished eagle-birdie-birdie to pull out the victory. He sank an 11-foot eagle putt at No. 16 to square the match and 14-footer on the 17th hole to give the Internationals the lead for the first time all day against Horschel and Burns, whose four-foot birdie putt on the last home was automatically conceded.

“I just felt it on the first tee today and it stayed with me all day,” Davis said. “I just was able to play some great golf all day long, all the way to that last putt. I just felt that one was going in like all the rest of them.”

Added Scott: “This was huge, what we did today. We just hung in there, like we have been doing all week. We were able to win the day for the first time and we just have to carry that over to tomorrow.”

A little bit earlier, 20-year-old rising star Tom Kim of South Korea holed a 10-foot birdie putt on the last hole to team with Si Woo Kim, also of South Korea, for a 1-up upset over Patrick Cantlay of Los Alamitos and UCLA, and Xander Schauffele of La Jolla and San Diego State.

“I had my team behind me,” said Kim, who claimed his first PGA Tour victory in the Wyndham Championship last month. “I wanted that putt more than anything in the world. I’m trying to bring energy to the team. That’s the least I can do for the team.

“We’re on American soil and it’s not easy for us Internationals, so I’m trying to use it as my inspiration.”

The Internationals’ other victory in the afternoon fourball matches came when Sungjae Im of South Korea and Sebastian Munoz of Colombia defeated Tony Finau and Kevin Kisner by a score of 3 and 2.

Jordan Spieth and Justin Thomas gave the Americans their only victory of the afternoon when Spieth chipped in from 19 feet for a birdie on the 15th hole to wrap up a 4-and-3 victory over Hideki Matsuyama of Japan and Taylor Pendrith of Canada.

Said Spieth, who combined with Thomas for a 4-0-0 in doubles play over the first three days: “I felt Justin was going to make his (five-foot) birdie putt, so I just tried to knock it in the hole, and that’s what happened.”

“They just turned things around from the first two days and started making some putts,” Love said. “(For Davis) to finish eagle-birdie-birdie this afternoon was just amazing. I liked it better when we were up by six points, but four ahead isn’t bad.

“We just have to come out tomorrow and get off to a fast start.”

In the morning foursome matches, Spieth and Thomas beat Conners and Im, 4 and 3; Scott and Matsuyama defeated Cameron Young and Collin Morikawa of La Canada Flintridge and Cal, 3 and 2; K.H Lee of South Korea and Tom Kim downed Scottie Scheffler and Burns, 3 and 2, and Finau and Max Homa took down Davis and Si Woo Kim, 4 and 3.

Here are the matchups in the 12 singles matches set for Sunday:

Thomas vs. Si Woo Kim; Spieth vs. Davis; Burns vs. Matsuyama; Cantlay vs. Scott; Scheffler vs. Munoz; Finau vs. Pendrith; Schauffele vs. Conners; Young vs. Im; Horschel vs. Lee; Homa vs. Tom Kim; Morikawa vs. Pereira, and Kisner vs. Christiaan Bezuidenhout of South Africa.