Schauffele Leads by 3 in Vegas After a 64 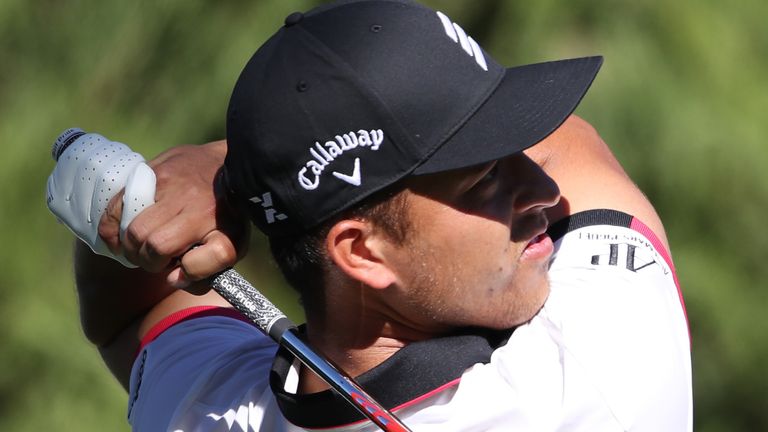 Xander Schauffele is on a roll in Las Vegas.

The eighth-ranked Schauffele made six straight birdies at one stage while posting a bogey-free, 8-under-par 64 at Shadow Creek Golf Club to take a three-stroke lead over Tyrrell Hatton of England midway through the CJ Cup at Shadow Creek.

“I got off to a hot start and was feeling really good,” said Schauffele, who was fifth in the U.S. Open and tied for second in the Tour Championship in his last two starts. “Then things slowed down and we were standing around a lot, so I was glad to go bogey-free coming in.

“My home course in Del Mar is a Tom Fazio-design like this one and has some of the same design features, although the greens are a little faster here. If you’re in the fairway, it frees you up a little bit to go for the pin.”

Schauffele, from La Jolla and San Diego State, started at No. 10 and made a birdie on No. 11, then added six in a row to close out the back nine. He managed his only birdie on the front nine with a 17-foot putt on the seventh hole and sank an 11-footer to save par on the ninth.

The 10th-ranked Hatton, the first-round leader at 65, overcame three bogeys on the back nine with birdies on the last two holes to shoot 68, while Russell Henley is four shots back in four after making three birdies on the first eight holes to kick-start another 68.

“It was an inconsistent day,” said Hatton, who won the BMW PGA Championship last week at Wentworth outside London and captured his first PGA Tour victory earlier this year in the Arnold Palmer Invitational.

“What bothered me most was going bogey-bogey on Nos. 15 and 16, especially the bad shot at 16, but it was nice to finish with two straight birdies. Hopefully, I can take that into the weekend.”

Said Henley: “I’m very happy with it. The greens are great, very fast, and I putted well, made a lot of nice par saves to keep my round going. Everything is right there in front of you and you just have to man up and hit the shots, and hang in there.”

Talor Gooch started at No. 10 and sank an eight-foot eagle putt at No. 18 before making three birdies in his last six holes for a bogey-free 65 and is five back in fourth, while sixth-ranked Collin Morikawa, the PGA champion from La Canada Flintridge and Cal, carded a bogey-free 65 and is one more down in a tie for fifth with Jason Kokrak, who birdied the last hole for a 66.

Matthew Fitzpatrick of England birdied five of the first seven holes in a 68 and is seven behind in seventh, while defending champion and third-ranked Justin Thomas recorded a bogey-free 66 and is eight back in a tie for eighth with Lanto Griffin (68), Hideki Matsuyama of Japan (68), Kevin Streelman (70) and Tyler Duncan (71).

Second-ranked Jon Rahm of Spain is tied for 15th after a 73, while fourth-ranked Rory McIlroy of Northern Ireland shot 69 and is in a tie for 26th that includes 11th-ranked Brooks Koepka, the 2018 CJ Cup champion who had a 68, and 14th-ranked Patrick Cantlay of Los Alamitos and UCLA totaled 72 and is tie for 33rd.