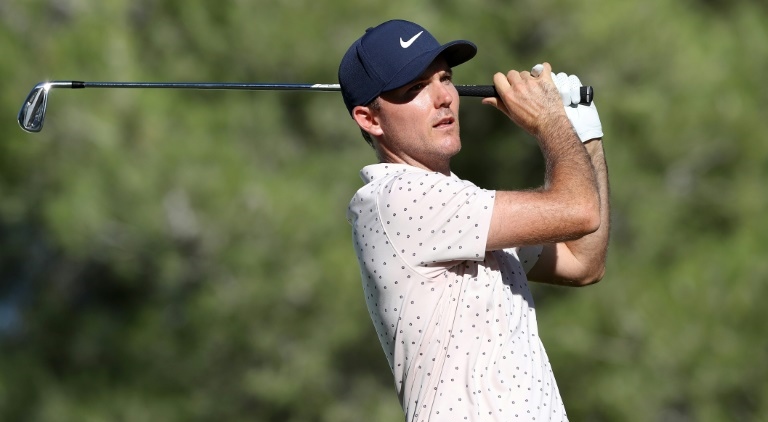 The 31-year-old Henley posted a bogey-free, 5-under-par 67 to take a three-stroke lead over Xander Schauffele, Lanto Griffin, Jason Kokrak and Talor Gooch to the final round at Shadow Creek Golf Club in Las Vegas.

“It was just a nice day, made a lot of good putts,” said Henley, who won the 2017 Shell Houston Open for the last of his three PGA Tour victories. “I made a nice par save on the third hole, just kept staying patient and made a lot of nice putts.

“I’m just trying to play my game and stay confident. I have to play another good round tomorrow, can’t play a couple over par and expect to win. It’s a tough course, but if you hit good shots you can give your self some chances for birdie.

“I have to keep playing my game, keep grinding it out, and make some putts.”

Henley, whose best finish last season was a tie for seventh in the Workday Charity Classic, made two birdies on the front nine, added three in a row to start the back nine before closing with six consecutive pars to record a 54-hole score of 15-under 201.

The eighth-ranked Schauffele, from La Jolla and San Diego State, held a three-stroke lead after two rounds, but made only two birdies while struggling to a 74, while Griffin made a seven-foot eagle putt at No. 7 and five birdies in a 66, Kokrak sank a four-foot birdie putt on the last hole for a 66, and Gooch had three birdies on the front nine in a 66.

“I was trying to figure out what was worse, whether the pace of play or my quality of golf,” said Schauffele, who has four PGA Tour victories, including the 2017 Tour Championship.

“It was kind of a tie. It was just a lot of bad breaks kind of. Not to be like a sour person, but just one of those days. Today was my bad day for the week, got it out of the way before Sunday, which is nice.”

Defending champion and third-ranked Justin Thomas, who won CJ Cup two of the last three years in South Korea, had a tap-in birdie on the last hole for a 68 and is five shots back in a tie for sixth with Jason Day of Australia, who holed out from 23 feet on the 11th hole to highlight at 66, and 10th-ranked Tyrrell Hatton of England, who didn’t make a birdie until the last hole with struggling to a 73.

Sixth-ranked Collin Morikawa, the PGA champion from La Canada Flintridge and Cal, is six down in solo ninth after making birdies on two of the last three holes for a 71, while