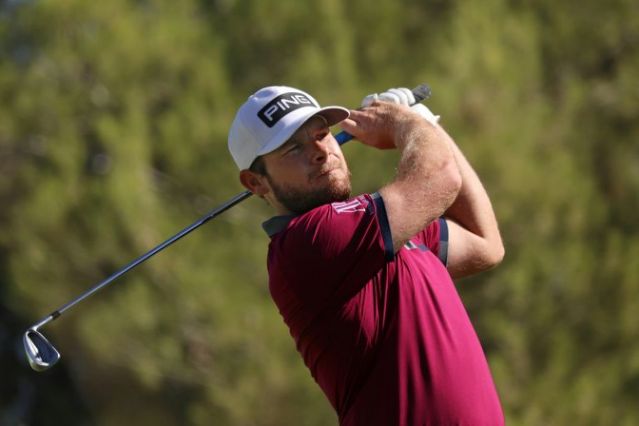 Tyrrell Hatton of England picked up right where he left off last week, when he won the BMW PGA Championship at Wentworth, outside London, an ocean and a continent away and moved to No. 10 in the World Golf Rankings.

Hatton, who turned 29 on Wednesday, shot 7-under par 65 in first round of the CJ Cup at Shadow Creek to take a one-stroke lead over eighth-ranked Xander Schauffele and Russell Henley at Shadow Creek Golf Club in Las Vegas.

The CJ Cup usually is played at the Golf Club at Nine Bridges on Jeju Island in South Korea, but was moved this year because of travel concerns caused by the Coronavirus pandemic.

“I’m really happy with my round, especially because play was little slow and we were out there a long time,” said Hatton, who has nine pro victories and claimed his first PGA Tour title earlier this year in the Arnold Palmer Invitational. “I’m a little tired, still struggling a little bit with jet lag after traveling on Tuesday.

“I’m happy to shoot 65 after playing so well last week, and I really like the golf course. It’s in amazing shape and the greens are in great condition. I putted great and I have to keep that going the next three days after getting a good night’s sleep.”

Hatton, who tied for sixth in the CJ Cup at Nine Bridges last year after tying for 14th in 2018, started on the back nine with birdie-birdie-eagle, holing out from 92 yards on the 12th hole en route to a 6-under 30 for his first nine holes. He had three birdies and two bogeys while finishing on the front, sinking a nine-foot birdie putt on No. 8 to grab the lead.

“I got home from the U.S. Open (last month) and for odd some reason I just didn’t feel like playing golf, so I didn’t for about 10 days before I started practicing again,” said Schauffele, who played for the first time since he finished fifth in our national championship at Winged Foot after tying for second in the Tour Championship.

“It was just one of those things. I started practicing again and didn’t feel too rusty out there today except on a few chips. I made a few mental errors, but I’m definitely happy with 6-under.”

Second-ranked Jon Rahm of Spain made the last of his seven birdies from six feet at No. 9 to cap a 67 and is tied for third with Tyler Duncan, the 2020 RSM Classic winner, who birdied two of the last three holes.

Joel Dahmen sank a four-foot birdie putt on the last hole for a 68 and is three shots back in a tie for sixth with Ryan Palmer, who also finished at 68, and Kevin Streelman, who had five birdies in yet another 68.

Cameron Smith of Australia holed a seven-foot birdie putt while finishing a 69 at No. 9 and is four down in a tie for ninth with Ian Poulter of England, Abraham Ancer of Mexico, Matthew Fitzpatrick of England and Si Woo Kim of South Korea.

Sixth-ranked Collin Morikawa, the PGA champion from La Canada Flintridge and Cal, and 14th-ranked Patrick Cantlay of Los Alamitos and UCLA are in a tie for 22nd at 71, while defending champion and third-ranked Justin Thomas, who also won the CJ Cup in 2017, made a double-bogey 7 on the last hole and slipped to a tie for 32nd with a 72.

Fourth-ranked Rory McIlroy of Northern Ireland is tied for 37th at 73, while former world No. 1 Brooks Koepka, who fell out of the top 10 to No. 11 this week after not playing for 10 weeks while recovering from knee and hip injuries, shot 74 and is tied for 45th.

Koepka won the 2018 CJ Cup at Nine Bridges for one of his seven PGA Tour victories, which include four majors.