Salas breaks through for first win 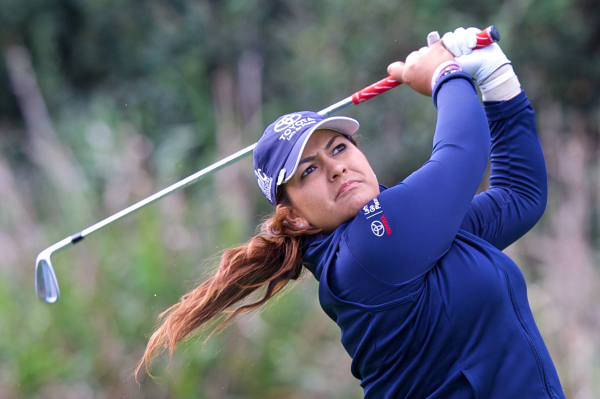 Lizette Salas of Azusa won for the first time in the LPGA Tour, carding a steady 1-under-par 71 to finish four strokes ahead of Lexi Thompson, Yani Tseng of Taiwan and Sarah Jane Smith of Australia in the Kingsmill Championship on the River Course at Kingsmill Resort in Williamsburg, Va.

Salas, who had finished in the top five on five occasions in her first two seasons on the tour without winning, built a five-shot lead with two early birdies in the final round after taking the lead with a bogey-free 65 in round three.

“I was just patient and happy, and I was ready,” said Salas, who was a two-time All-American at USC. “I took a different approach this week. I tried not to think too much or try to be perfect. I went to a new putter last week at home and it paid off.

“There are so many emotions right now that I’m just trying to breathe. I looked at the leaderboard a lot and on the 11th hole I saw I was three shots ahead, but then Yani made a strong move. Then on 17, I saw I had a nice cushion, so I was able to enjoy it.”

Tseng, the former world No. 1 who has struggled the last two years, birdied three of four holes through No. 15, but then took a double-bogey on the final hole to finish with a 69.

Smith posted a bogey-free 66 that equaled the best score of the day to move up 14 spots on the leaderboard, while Thompson, the Kraft Nabisco champion, finished with a 69 that included a lone bogey at No. 6 but could not make a move on the back nine.

Lydia Ko, the 17-year-old from New Zealand, was slowed by a double-bogey 6 on the 12th hole and closed with a 71 to finish five shots back in a tie for fifth with So Yeon Ryu of South Korea, who had a 69.

Thidapa Suwannapura of Thailand was solo seventh after a 69, and Mina Harigae of Monterey finished with a  68 to tie for eighth with Sandra Gal of Germany, who had a 69, Azahara Munoz of Spain, who totaled 70, and Pornanong Phatlum of Thailand, who came in at 72.

Stacy Lewis, who could have taken the No. 1 spot in the Rolex Women’s World Golf Rankings with a victory, wound up with a 74 that included a triple-bogey 7 on the last hole and tied for 12th.