Rodgers, Martin Share the Lead Going to the Final Round of the RSM Classic 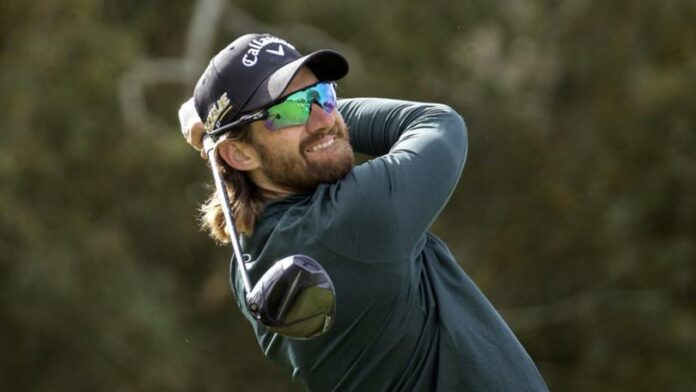 Patrick Rodgers, who tied Tiger Woods’ Stanford record with 11 victories, has yet to win on the PGA Tour, but seems on the verge of breaking through.

The 30-year-old Rodgers (pictured), who has finished second three times and third another three times his career, fired a 6-under-par 64 and is tied for the lead with Ben Martin after the third round of the RSM Classic on the Seaside Course at Sea Island Golf Club in St. Simons, Ga.

“I feel like I put together a good off-season with my coach, Jeff Smith,” said Rodgers, whose only pro victory came in the 2015 Columbia Championship on what is now the Korn Ferry Tour. “We really put a good plan together. I’ve been feeling more comfortable. It’s a hard game, and it’s always nice to see hard work pay off.

“It was a great day out there. I’m just excited to put some good rounds together and it was nice to get on a roll there on the back nine.”

Rodgers, who tied for third recently in the Butterfield Bermuda Championship, made his one bogey on the second hole, had four birdies before the turn and reeled off four more in a row through No. 16 while recording a 54-hole score of 14-under 198.

Martin, a two-time winner on what is now the Korn Ferry Tour,  made three birdies on each nine and actually held sole held sole possession of the lead before hitting a wild drive on his way to his lone bogey at No. 18 while posting a score of 65.

“I would have loved to have kept a clean card there,” said Martin, whose only PGA Tour victory came in the 2015 Shriners Hospitals for Children Open. “It was a good Saturday. I’m just excited to be in the mix on Sunday.

“It was solid. I don’t know my stats, but it seemed like I hit a lot of fairways and a lot of greens. I don’t remember chipping a ton, so it was kind of the way you want to play golf. I took advantage of opportunities and didn’t make a ton of mistakes. I was hitting my targets off the tee, giving myself plenty of opportunities on the greens and seeing a few putts go in.”

Adam Svensson of Canada made an early bogey on the 11th hole after starting on the back nine before sinking a five-foot birdie putt at No. 15, and collected six birdies coming home on the front nine in a 62 that was the low score of the day and is one stroke behind in a tie for third with Sahith Theegala of Chino Hills and Pepperdine, who followed a 63 with a bogey-free 68, and second-round co-leader Andrew Putnam, also of Pepperdine, who made only one bogey in a 69.

Left-hander Brian Harman started at No. 10 and made six birdies on the back nine, then added three on the front, but also had three bogeys in a 64 and is two strokes back in a big tie for sixth with Taylor Pendrith of Canada and Taylor Montgomery, who both shot 65; Alex Smalley, who finished at 67; Kevin Streelman, who finished at 68; Beau Hossler of Rancho Santa Margarita, who wound up at 69, and second-round co-leader Harry Higgs, who came in at 70.

Rookie Cole Hammer, who also held a share of the lead after 36 holes and is playing this week  on a Sponsor’s Exemption despite missing six straight cuts earlier this year, struggled to a 72 with only two birdies and slid to a tie for 17th.