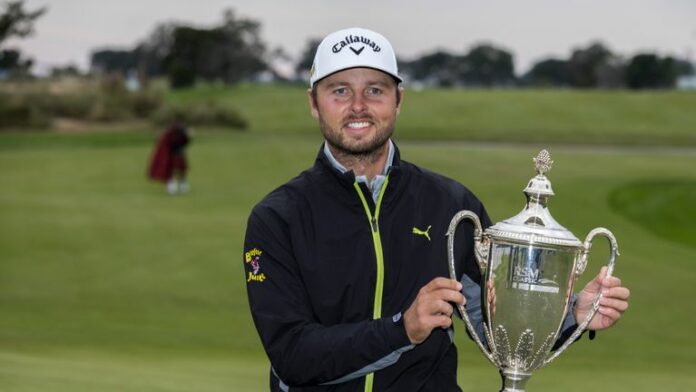 Adam Svensson of Canada was the last man standing in the RSM Classic.

The 28-year-old Svensson was locked in a four-way tie for the lead before he made birdies on the 16th and 17th holes en route to a two-stroke victory over Callum Tarren of England, Sahith Theegala and Brian Harman on the Seaside Course at Sea Island Golf Club in St. Simons, Ga.

“To be honest, it’s not even real right now,” Svensson said after claiming his first PGA Tour victory and claiming berths in the Masters, the PGA Championship and the Sentry Tournament of Champions in January. “I didn’t even think about (the exemptions) until it was brought up to me 15 minutes ago.

“I’m so happy. I put so much work in. To win on the PGA Tour means everything to be me. I just kept believing in myself, and here I am. I’m more proud of what I’ve accomplished from the direction I was going in, to the direction I’ve gone now. I relied mostly on talent when I was younger. I didn’t put enough work in, I wasn’t that disciplined.

“Winning is more fulfilling than money to me. I’m more just proud of myself for things I’ve been doing.”

Svensson, whose only other professional victory came in the 2018 Bahamas Great Abaco Classic on the Korn Ferry Tour, sank an 18-foot birdie putt on the 16th hole and a 10-footer at No. 17 in his  bogey-free 64, which gave him a winning score of 19-under 263.

Tarren held the clubhouse lead until Svensson finished after holing a nine-foot birdie putt on the last hole to cap another bogey-free 64, while Harman came close with a five-foot eagle putt on the 15th hole in a bogey-free 65, and Theegala, from Chino Hills and Pepperdine, bounced back from a double-bogey 7 on the seventh hole with four birdies on the back nine of a 66.

Said Tarren, who posted the best finish of his PGA Tour career: “It’s the best golf tour in the world and I love playing out here and hopefully I’m out here for a long time.

Joel Dahmen made a bogey on the first hole but collected five birdies on the back nine of his 64 and wound up four shots behind in a tie for fifth with Cole Hammer, who closed with a 65; Chris Stroud, who also wound up at 65; Seamus Power of Ireland, who made four straight birdies on the front nine in a 66, and Alex Smalley, who sank a five-foot eagle putt on the 15th hole to highlight a 67.

Robby Shelton made two late birdies in a bogey-free 65 and finished one more down in a tie for 10th with Erik Barnes, who had five birdies and a bogey in another 66; David Lingmerth of Sweden, who made two birdies down the stretch in one more 66; Wyndham Clark, who hit the shot of the way with a 171-yard hole in one on the 17th hole in his own 66, and Patrick Rodgers of Stanford, who was in the hunt most of the way before closing with a 70.

This is the final event of the Fall portion of the 2022-23 PGA Tour season, which will continue with the Sentry Tournament of Champions on the Plantation Course at Kapalua Resort in Kapalua, Maui, Hawaii, on Jan. 5-8.