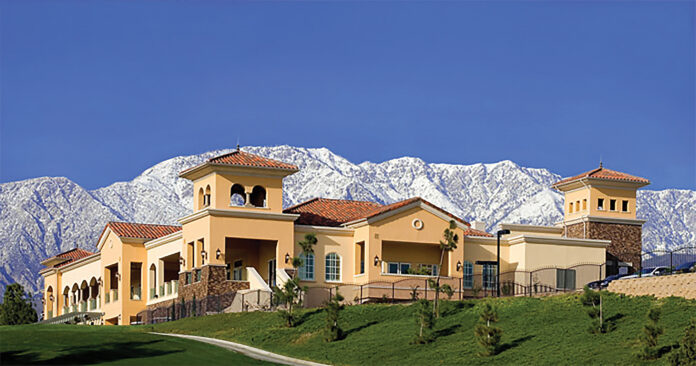 Red Hill Country Club, a private club born in 1921 in the foothills of the San Gabriel Mountains in San Bernardino County, is celebrating its 100th anniversary this year.

The centennial celebration was supposed to be marked by a series of events throughout 2021, but the ongoing pandemic changed those plans and instead led to a 1920s-themed “Centennial Gala” over a weekend in late October. The festivities featured two days of golf competition for past and present members, a formal dinner with Great Gatsby-style décor and costumes, as well as exhibits from Red Hill’s storied history. A book on the club’s 100-year history written by Julie Walke also was distributed.

“This has been an exciting time for our members,” said Michelle Lindley, a third-generation member who was chairperson of Red Hill’s Centennial Committee and whose home overlooks the front nine.

Renowned architect George C. Thomas designed Red Hill’s first nine holes in what was then a sparsely populated agricultural area bordering land incorporated as Upland in 1906 and became part of a city incorporated as Rancho Cucamonga in 1977. The second nine was designed by William P. Bell in 1947, completing an 18-hole championship layout that remains as picturesque as it was a century ago, with Mount Baldy’s 10,000-foot peak looming it its backdrop.

Thomas and Bell, of course, were among the biggest names (along with Alister MacKenzie, Donald Ross, A.W. Tillinghast and others) who helped usher in the so-called “Golden Age” of golf course architecture beginning in “The Roaring Twenties” by designing some of the country’s best and most famous courses.

Construction began on Red Hill in the spring of 1921, and it officially opened for play as a nine-hole course on March 18, 1922. (Interestingly, Red Hill was Thomas’ first original design in Southern California, coming five years before he and Bell had collaborated on Riviera Country Club in Los Angeles, which opened in 1927.)

“A lot of us consider Red Hill the big brother to Riviera, and I liken our 18th to the finishing hole at Riviera,” said John Mack, Red Hill’s current club president and a member for the past 16 years. (No. 18 at Red Hill, considered its primary signature hole, is a 408-yard, dogleg-right par-4 that plays uphill toward the clubhouse. Sound familiar?)

One hundred years after it opened, Red Hill remains a traditional or “classic” course, featuring tree-lined fairways, elevation changes, doglegs that require you to work the ball both ways, penal rough, and small, fast-paced greens reminiscent of so many vintage courses from the “Golden Age.”

Though the course is considered short by modern-day standards—it plays 6,575 yards from the back tees—it’s still a shot-maker’s course that demands the use of all of the clubs in your bag.

PGA Tour star Kevin Na, an honorary member like tour veteran John Daly is, had the course record of 62 until 23-year-old Derek Castillo, a first-year tour pro from Yorba Linda, shot an iconic 59 this past July. And, unquestionably, the best amateur player in club history was Dr. Frank “Bud” Taylor Jr., winner of 11 club championships, two California Amateur Championships, runner-up in the 1957 U.S. Amateur and four-time qualifier for the Masters (including a 13th-place finish in ’57).