Rahm, Thomas Share First Round Lead in The Northern Trust at 8-Under 63 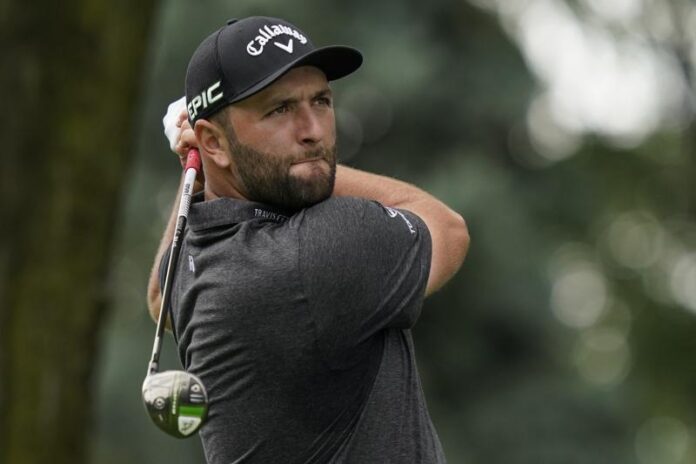 The cream rose to the top in the first round of the opening event in the FedEx Cup playoffs.

Top-ranked Jon Rahm of Spain and fifth-ranked Justin Thomas both carded scores of 8-under-par 63 to tie for the lead after one round of The Northern Trust in breezy conditions after overnight rain at Liberty National Golf Club in Jersey City, N.J.

The tournament is limited to top 125 players in the FedEx Cup rankings, although Patrick Reed withdrew in the morning because of an ankle injury after Louis Oosthuizen of South Africa pulled out at the start of the week due to a neck injury.

The top 70 after Sunday move on to the BMW Championship next week at Caves Valley Golf Club,  Owings Mills, Md., with only the top 30 after two events qualifying for the Tour Championship at East Lake Golf Club in Atlanta in two weeks.

“The fact that me and Justin shot a low score like that, it shows it’s possible, but we both played really, really good golf,” said Rahm (pictured), who is coming off his second bout with Covid-19 and playing for the first time since he tied for third in the Open Championship last month.

“I’m assuming he did play well and, and I felt like I played great. If it ever looked easy, it is, again, due to ball striking. I can put it in the fairway. From the fairway, you can be aggressive. … It probably felt a lot tougher within us than it appeared outside, but at the end of the day, when you’re striking it well, it’s going to seem easier.

“Scores are out there. We just showed it. That’s mainly due to the fact of the softness of the greens.”

Rahm, the reigning U.S. Open champion, collected four birdies on each nine in his bogey-free round, including three in a row through No. 8 and three more in succession through No. 17 before missing a 17-footer for a birdie on the last that would have given him the outright lead.

Thomas, the 2017 FedEx Cup champion, made five birdies on the front nine, another at No. 14, and after his lone bogey on the 15th hole, he birdied the last three holes to finish even with Rahm.

“I’m very proud of the way I played, especially with how windy it was,” said Thomas, who hasn’t had his best stuff since winning the Players Championship in March. “The wind made it difficult to get the ball close to the hole and even made it tough to putt. I almost missed a two-footer when I got hit by a gust of wind.

“I got my baby back, my gamer. I’ve had a lot of success with that putter, but sometimes you’ve got to put it on the shelf for a while when things aren’t going right. I have a lot of familiarity with it, and it felt good in my hands. I had the speed right on the greens and was able to make some putts.

“I’ve working hard the last few weeks and months, so it was nice to see it all pay off.”

Harold Varner III made seven birdies and two bogeys in a 66 that left him alone in third at 66, while Adam Scott of Australia, who won this tournament in 2013, sank a nine-foot eagle putt on the sixth hole in a 67 and is tied for fourth with Kevin Na of Diamond Bar, Cameron Tringale of Mission Viejo, Robert Streb, Mackenzie Hughes of Canada and Tony Finau.

Ninth-ranked Patrick Cantlay of Los Alamitos and UCLA birdied three of his first four holes to kick-start a 68 and is tied for 10th with Cameron Champ of Sacramento, Viktor Hovland of Norway, Keith Mitchell and Sebastian Munoz of Colombia.

Sixth-ranked Bryson DeChambeau of Clovis is tied for 52nd at 71, while third-ranked Collin Morikawa of La Canada Flintridge and Cal, the FedEx Cup points leader who won the Open Championship at Royal St. George’s, struggled to a 74 and is in a tie for 102nd that includes Olympic Bronze Medalist of C.T. Pan of Taiwan.