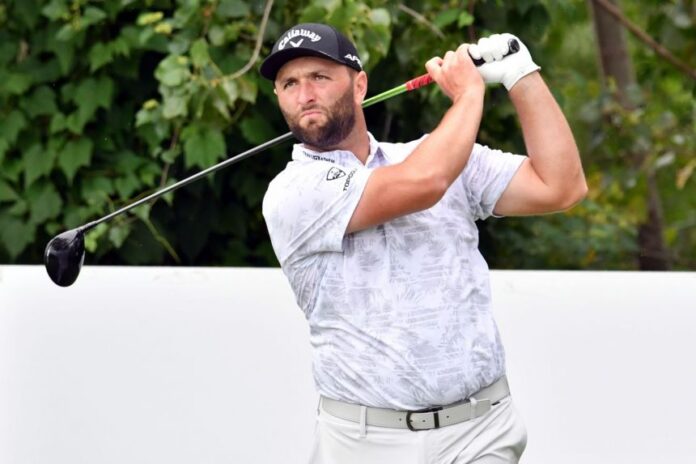 Jon Rahm of Spain in No. 1 in the World Golf Rankings and remained atop the leaderboard as well.

The 26-year-old Rahm posted a bogey-free, 4-under-par 67 to take a one-stroke lead over Tony Finau midway through The Northern Trust, first event of the FedEx Cup playoffs, at Liberty National Golf Club in Jersey City, N.J.

Rahm, the reigning U.S. Open champion, is bogey-free through 36 holes.

“It’s nice to be bogey-free, but it’s not like it’s goal No. 1,” said Rahm, who is playing for the first time since tying for third in the Open Championship last month after a second bout with Covid-19. “It might be actually first time I go 36 holes bogey-free. The goal is to win a tournament and put yourself in the best position. If I had to choose, I would rather be leading than bogey-free.

“I left myself a couple really tough up-and-downs and I was able to make good putts for par. I’m just accepting that I can miss shots. You get a little too greedy, miss the green, and you can have a tough up-and-down, and I’ve been able to save those so far.

“Coming into the weekend, I’m definitely going to have to clean a couple of those mistakes up.”

Rahm, who opened with a 63, started at No. 10 and made his only birdie on the back nine at the 13th hole before adding three birdies in a span of four holes through No. 7 to shoot 33 coming home on the front nine to record a 36-hole score of 12-under 130.

Finau birdied three of the first four holes and added five more on the back nine to tie for the lead before making his lone bogey in a 64 on the last hole.

“You just try to learn and I feel like I’ve learned a lot being in this position before,” whose only PGA Tour victory came in the 2016 Puerto Rico Open but has 39 top-10 finishes in the last five seasons.

Fifth-ranked Justin Thomas, who tied for the first-round lead with Rahm, made four bogeys and one birdie on the back nine after starting at No. 10, but carded three straight birdies before sinking a 12-foot eagle putt at No. 8 to salvage a 69.

Thomas is two shots back in a tie for third with fourth-ranked Xander Schauffele of La Jolla and San Diego State, the Olympic Gold Medalist, who made eagles on the sixth and eighth holes in a 62, and Keith Mitchell, who had a 64 that included six straight birdies.

Eighth-ranked Brooks Koepka birdied five straight holes through No. 6 and also made his lone bogey at No. 18 in a 64 and is four strokes behind in a tie for 10th with Jordan Spieth, the 2015 FedEx Cup champion, who holed eagle chip shots on the fifth and sixth holes while equaling Schauffele’s 62.

Ninth-ranked Patrick Cantlay of Los Alamitos and UCLA is tied for 12th after a 67, sixth-ranked Bryson Dicambas of Clovis holed out for eagle from 60 yards on the eight hole while finishing a 65 on the front nine and is tied for 17th, while 10th-ranked Harris English eagled the 13th hole in a 68 and is in a tie for 25th that includes Masters champion Hideki Matsuyama of Japan, who stumbled to a triple bogey-7 on the last hole to also shoot 68.

Second-ranked Dustin Johnson, the defending Northern Trust and FedEx Cup champion, totaled 70-72—142 and missed the cut by one stroke, third-ranked Collin Morikawa of La Canada Flintridge and Cal, the FedEx Cup points leader entering the week but battling a back injury, shot 74-70—144 to miss the weekend by three shots, and Olympic Bronze Medalist of C.T. Pan of Taiwan missed by four at 74-71—145.

Johnson and Morikawa are well inside the top 70 and will qualify for the BMW Championship, the second playoff event next week, but Pan is projected to finish at 120th and is done for the season.