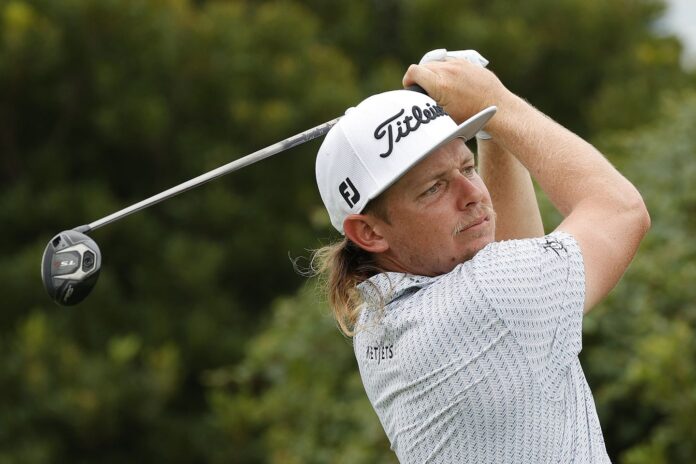 The 28-year-old Smith posted a bogey-free, 11-under-par 60 to catch Rahm atop the leaderboard after the third round of The Northern Trust, first event of the FedEx Cup playoffs, at Liberty National Golf Club in Jersey City, N.J.

Tournament officials have postponed the final round from Sunday until Monday because of approaching Tropical Storm Henri.

“It’s such a weird game,” said Smith, who missed an 11-foot birdie putt on the 18th hole that would have given him a 59. “I was so frustrated with my game yesterday. I hit the ball all over the place but was able to scramble and make a decent score. I got here today and my ball-striking was so much better.

“On that last putt, I just tried to do what I did the rest of the day, but I thought the ball was going to break off the bunker on the right, but it didn’t and I missed it. That was just a misread, one of the few I had today.

“The course is playing soft and there’s not much wind, and there are so many good players that are going low. This is the FedEx Cup playoffs and we’re all here to win.”

Smith, who has won three times on the PGA Tour and five times as a pro, collected six birdies on the front nine and five more coming home to record a 54-hole score of 16-under 197 and pull even with Rahm.

Rahm, the reigning U.S. Open champion who has held at least a tie for the lead since opening with a 63, had seven birdies in a second straight 67—overcoming a double bogey 7 on the 13th hole, where he hit his second shot into the water.

“I certainly hope I don’t have to rely on something bad to happen to get a big win,” said Rahm, who is coming off his second bout with Covid-19 and claimed his first major title after the first. “But it’s nice to come off something bad that happens in life and win.

“I had four weeks off at home and came here nice and relaxed. My ball-striking has been good all year and I’ve just kept it going, and my putting has been good since the Memorial (when he had to withdraw with a six-stroke lead after three rounds when he first tested positive for Covid-19).

“That’s why I have been winning instead of just finishing in the top 10. If I can keep it up, I will have plenty more chances to win.”

Erik van Rooyen of South Africa had a bogey on the first hole but then made 10 birdies in a 62 and is one stroke back in solo third, while fifth-ranked Justin Thomas, the 2017 FedEx Cup champion, birdied two of the last three holes for a 67 and is two shots back in a tie for fourth with Tony Finau, who shot 68 alongside Rahm in the final twosome.

Shane Lowry of Ireland sank a six-foot eagle putt on the sixth hole and added seven birdies to shoot 62 and is three down in a tie for sixth with Viktor Hovland of Norway, who birdied four of the first eight holes on his way to a 65, and Tom Hoge, who had three birdies coming home in a 67.

Corey Conners of Canada holed out from 147 yards for an eagle on the ninth hole and had nine birdies in another 62 and is four strokes behind in a tie for 10th with Harold Varner III, who started the last hole with two wild shots en route to a triple bogey-7 to finish at 67.

Fourth-ranked Xander Schauffele of La Jolla and San Diego State, the Olympic Gold Medalist, made only two birdies in a 70 and is in a tie for 11th that includes eighth-ranked Brooks Koepka, who birdied four of the last six holes in a 68, while ninth-ranked Patrick Cantlay of Los Alamitos and UCLA is tied for 24th after making three early birdies in a 69.

Masters champion Hideki Matsuyama of Japan and 10th-ranked Harris English both shot 70 and are in a tie for 40th, while sixth-ranked Bryson DeChambeau of Clovis is tied for 50th following a 72.