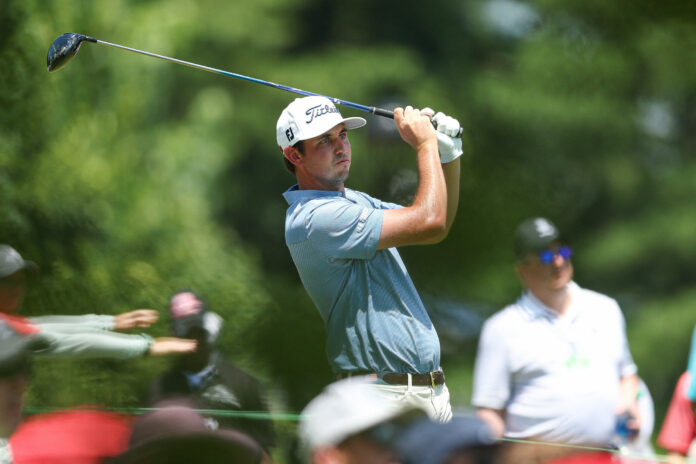 J.T. Poston simply didn’t take his foot off the gas.

The 29-year-old Poston, who led by three strokes after round one, carded a 6-under-par 65 in round two and took a four-stroke lead over Denny McCarthy midway through the 51st John Deere Classic at TPC Deere Run in Silvis, Ill.

“That was the game plan coming into the day, to keep making birdies,” said Poston, who shot 62 in the first round for the second straight week. “Last week, the one thing I think I learned after playing well Thursday was to try to keep the pedal down. I think this golf course may yield a few more birdies than last week, but at the same time, you got to go out there and hit some golf shots to stay aggressive. I was able to do that, which is nice.

“I feel great. My last few rounds out here have been great going back into last week, so just going to try and keep riding that momentum and doing what I’m doing, don’t change anything, and just kind of take the good looks when they come, and when I don’t have a good number or don’t feel good over it, just be smart about it.

“Fortunately, I’m in that position and I can do that.”

Poston, who tied for second in the Travelers Championship last week, birdied four straight holes through No. 5 before making his lone bogey on the sixth hole, but added three birdies the rest of the day to record a 36-hole total of 15-under 127.

McCarthy, whose only professional victory came in the 2018 Web.com Championship and who tied for seventh recently in the U.S. Open, made three birdies on each nine in another 65.

Rookie Matthias Schwab of Austria made birdies on the last three holes and collected six in all on the back nine and eight overall during yet another 65 and is five shots behind in a tie for third with Emiliano Grillo, who had a 64, rookie Christopher Gutterup, who had eight birdies in a 67, and Chris Naegel, who had a second 66.

“I had a really nice back nine with those six birdies,” said Schwab, who won five amateur titles in Europe but has yet to win as a pro. “It was fun and I took a lot of positive things out of the round. Everything just kind of clicked and it was great to hit a lot of good iron shots and make a bunch of good putts.

“I think I’ve played pretty well this season, even though the results haven’t always shown it. I think I’m on the right track and the first two days here have shown that. I hope to keep it up over the weekend and have a good finish to the season.”

Maverick McNealy of Portola Valley and Stanford had nine birdies in a 63 that was the low score of the day and is six down in a big tie for big seventh that includes Kelly Kraft, who also had a 63, C.T. Pan of Taiwan, who carded a bogey-freed 64, Callen Tarren of England (65), Taylor Moore (66), Scott Stallings (66), Vaughn Taylor (68) and Michael Gligic of Canada (69).

Patrick Rodgers of Stanford made a hole in one from 131 yards on the and is tied for 46th after he carded a second straight 69. It was Rodgers’ second ace on the PGA Tour, as he also made one last year in the first round of the Sanderson Farms Championship.

Defending champion Lucas Glover finished at 74-66—140 and missed the cut by one stroke.