Pieters leads Knox by 1 after 65 at Firestone 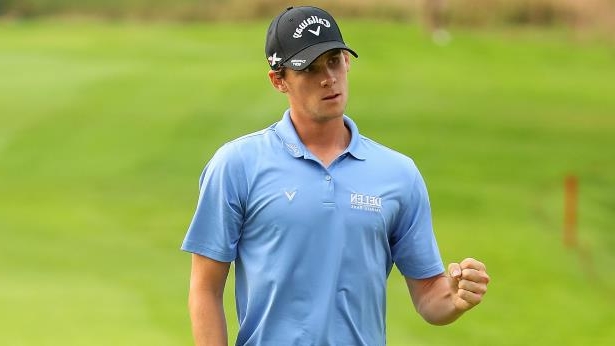 Thomas Pieters of Belgium carded a bogey-free 5-under-par 65 to take a one-stroke lead over Russell Knox of Scotland after the first round of the WGC-Bridgestone Invitational on the South Course at Firestone Country Club in Akron, Ohio.

The 25-year-old Pieters has Special Temporary Membership on the PGA Tour and can claim full playing privileges if he wins the WGC event he is playing for the first time.

“I only had two putts above the hole all day; the others were all straight forward,” said Pieters, who has won three times on the European Tour. “I was pretty terrible off the tee, so I hit a lot of 3-woods, but I was able to hit the greens in regulation, eight or nine in a row at one point.

“I just played the course and it was a pretty stress-free round, so I’m pretty happy with it. I just want to stay aggressive and keep having fun.”

Knox holed his second shot from 76 yards for an eagle on the second hole while finishing on the front nine, and was tied for the lead before making a bogey on the last hole to shoot 66.

Second-ranked Jordan Spieth, playing for the first time since winning the Open Championship two weeks ago at Royal Birkdale, holed two birdie putts of about 50 feet in a 67 and is tied for third with fourth-ranked Rory McIlroy of Northern Ireland, the 2014 Bridgestone champion, sixth-ranked Jon Rahm of Spain, Bubba Watson, Kevin Kisner and Ross Fisher of England.

“I made a couple of long putts back-to-back in the middle of the round,” said Spieth, who can complete the Career Grand Slam by winning the PGA Championship next week at Quail Hollow. “Sometimes I wish my five-footer were 50 footers.

“We have a pretty heavy stretch of golf coming up and I just want to put four good rounds together this week heading into the last major of the year. I’m really excited about the opportunity.”

Top-ranked Dustin Johnson, the defending champion, totaled 68 and is tied for ninth with 2011 champion Adam Scott of Australia, Jimmy Walker, Charley Hoffman of Poway, Adam Hadwin of Canada and Andres Romero of Argentina.

Third-ranked Hideki Matsuyama of Japan shot 69 and is in a tie for 15th that includes Jhonattan Vegas of Venezuela, who repeated as champion in the RBC Canadian Open last week, and ninth-ranked Alex Noren of Sweden.

Rickie Fowler of Murrieta, ranked 11th, is tied for 22nd at 70, while seventh-ranked Jason Day of Australia posted a 71 and is tied for 33rd with 10th-ranked Brooks Koepka, the U.S. Open champion, plus Phil Mickelson and 12th-ranked Matt Kuchar, runner-up to Spieth in the Open Championship.

Fifth-ranked Sergio Garcia of Spain, the Masters champion who was married last weekend, shot 72 and is a tie for 43rd that includes eighth-ranked Henrik Stenson of Sweden and 13th-ranked Justin Rose of England.