Kim up 2 after 68 in Women’s British Open 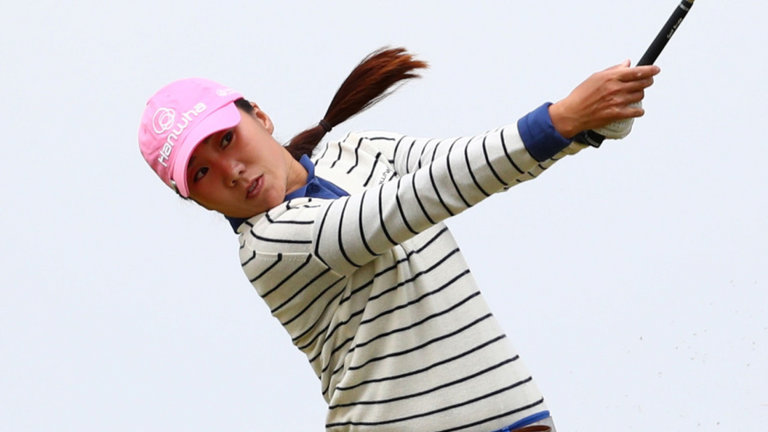 In-Kyung Kim simply wanted to get out of the inclement conditions during the second round of the Ricoh British Women’s Open.

By the time she did, the 29-year-old South Korean posted a 4-under-par 68 to take a two-stroke lead over Lexi Thompson and Georgia Hall of England at Kingsbarns Golf Links in Fife, Scotland.

“I really didn’t know what I was shooting to be honest with you,” said Kim, who has won six titles on the LPGA Tour and three on the Ladies European Tour, four of them coming since last September. “The last few holes the rain got really tough. I thought we could not finish. So the last hole we kind of went for it.

“I wish I knew the reason (for her brilliant play in the last year). It’s just consistent shot- making, I think. I’ve been hitting the ball very well and then starting to make some putts. That’s when I shoot low scores.”

The second-ranked Thompson collected five straight birdies through No. 14 while also shooting 68, while Hall had four birdies in a row through No. 5 in a 67.

“I definitely enjoyed the back nine rather than my first few holes,” said Thompson, whose only major title came in the 2014 Kraft Nabisco Championship. “I had a little bit of a slow start, but I hit it great the whole day and I knew it was a matter of time before I was going to make a few birdies, and I just got on a roll there.

“I’m going to get a little workout in this afternoon and then just make sure I relax and be ready for tomorrow. I didn’t get too much sleep last night with the quick turnaround. But just focus on relaxing tonight and get a good night’s rest.”

Ally McDonald carded her second 68 and is three shots back in fourth, while Mo Martin of Pasadena and UCLA, the 2014 Women’s British Open champion, shot 67 and is one more back in a tie for fifth with Ha Na Jang of South Korea, who had a 68, and Jodi Ewart Shadoff of England and Chella Choi of South Korea, who both finished at 70.

Shanshan Feng of China and Thidapa Suwannapuru of Thailand totaled 67 and are five down in a tie for ninth with Moriya Jutanugarn of Thailand, who wound up at 68, Megan Khang, who totaled 69, and Anna Nordqvist of Sweden, who came in at 70.

Stanford grad Michelle Wie, the first-round leader at 64, stumbled to a 76 and is tied for 21st, fifth-ranked Lydia Ko of New Zealand shot 70 and is tied for 65th, and top-ranked Ariya Jutanugarn finished at 71-77—148 to miss the cut by five strokes.