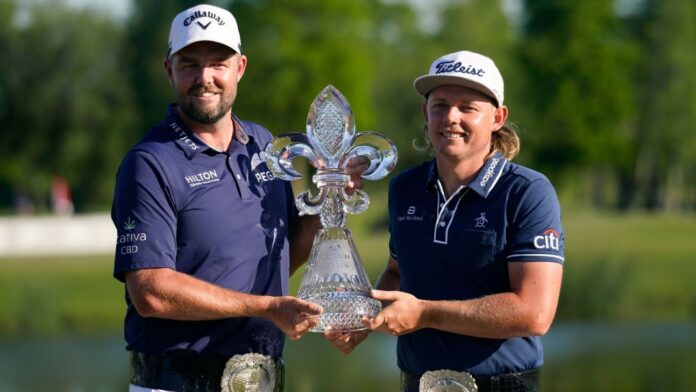 Scottie Scheffler hasn’t really met his match this season, with four victories that have put him atop the FedEx Cup Standings.

That’s why Scheffler and his teammate, Ryan Palmer, will be among the favorites this week in the Zurich Classic of New Orleans, the PGA Tour’s only full-field team event, at TPC Louisiana in Avondale, La. Palmer won the title in 2019 with Jon Rahm of Spain.

Cameron Smith (pictured, right) and Marc Leishman (left) of Australia claimed the title last year in a playoff over Louis Oosthuizen and Charl Schwartzel, and although the South Africans are not in the field this year, the Aussies will be back to defend their title.

“Cameron was ranked in the Top 10 in the World Golf Rankings (No. 6) this week on the strength of an excellent season last year and a victory in the opening event this year,” said Steve Worthy, the Zurich tournament director and CEO of the Fore!Kids Foundation. “Marc has also played very well of late, with a tie for third and fourth in the first two events of the Fall season, so we expect they will make a very strong defense of their title.”

Smith captured the Sentry Tournament of Champions and the Players Championship in addition to tying for third in the Masters Championship and is second in the FedEx Cup standings, probably is the hottest player in the world other than Scheffler.

Leishman and Smith won with a par on the second playoff hole at TPC Louisiana on their second extra trip up the par-5 18th hole, after Oosthuizen pushed his tee shot into the water and narrowly missed an 11-foot putt for par.

“It’s just nice to be able to celebrate with friends,” said Leishman, who saved the Aussies on the 16th hole in regulation with a 23-foot chip-in for birdie after Smith’s shot went into the water. “I forgot to get the ball out of the hole, actually. Louis had to throw it to me. It was nice to make that, settle us down a little bit and we were able to finish it off in the playoff.

“(Smith) hit a really good shot. It was the right club and the right shot, just drifted a little in the wind. I was just concentrating on my game, and I was lucky enough to be on the up slope. It wasn’t the hardest chip in the world, but under the conditions, well, I won’t say it was a must-make, but it was certainly very helpful that it went in.”

Said Smith: “It was really tough. That back nine was brutal, but we hung in there. I guess I’m good at picking good partners. We had such a good week on and off the golf course.”

Other top teams in the field included Scheffler and Palmer, Victor Hovland of Norway and Collin Morikawa, Patrick Cantlay and Xander Schauffele, Shane Lowry of Ireland and Ian Poulter of England, Tommy Fleetwood of England and Sergio Garcia of Spain, Billy Horschel and Sam Burns, Harold Varner III and Bubba Watson, Danny Willett and Tyrrell Hatton of England, Joaquin Niemann and Mito Pereira of Chile, Sungjae Im and Byeong Hun An of South Korea, and Graeme McDowell of Northern Ireland and Seamus Power of Ireland.

For Four-Ball, the players will each play his own ball throughout the entirety of the round, with the best score on each hole recorded.

1. Cameron Smith-Marc Leishman, Australia – The defending champions claimed the title a year ago in a playoff over Louis Oosthuizen and Charl Schwartzel of South Africa. Smith also won with Jonas Blixt of Sweden in 2017 in another playoff, over Kevin Kisner and Scott Brown. Smith has won twice this season, including The Players, Leishman has six PGA Tour wins.

2. Patrick Cantlay-Xander Schauffele, United States – Cantlay is the reigning FedEx Cup champion and Schauffele captured the Gold Medal at the 2021 Olympic Games in Japan. Cantlay has seven PGA Tour victories and almost got No. 8 last week, while Schauffele has four. The Southern Californians are making their debut in the Zurich Classic of New Orleans.

3. Scottie Scheffler-Ryan Palmer, United States – The top-ranked Scheffler has won four of his last six events, including the Masters, and Palmer has won four times on the PGA Tour, including when he teamed with Jon Rahm to claim the 2019 Zurich title by three strokes over Tommy Fleetwood and Sergio Garcia. Scheffler tied for eighth with Bubba Watson last year.

4. Collin Morikawa, United States-Viktor Hovland, Norway – Based on the World Golf Rankings, Morikawa and Hovland could be favored because Morikawa is No. 2 and Hovland is No. 5, but both are making their debut in the Zurich Classic of New Orleans. Morikawa is a two-time major champion, while Hovland has six victories, including three on the PGA Tour.

5. Tommy Fleetwood, England-Sergio Garcia, Spain – Fleetwood and Garcia made a run for the Zurich Classic title three years ago, but finished second, three shots behind Jon Rahm and Ryan Palmer. However, the event was cancelled because of Covid-19 in 2020 and they did not enter last year. Garcia won the 2010 Gary Player Invitational with teammate John Cook.

6. Shane Lowry, Ireland-Ian Poulter, England – Lowry counts the 2019 Open Championship at home in Ireland at Royal Portrush among his five professional victories, while Poulter has 17 titles around the world. Not only that, Poulter is one of the best match play golfers in the world with a 15-8-2 record in the Ryder Cup. In addition, he won the 2010 WGC-Match Play title.

7. Billy Horschel-Sam Burns, United States – Horschel teamed with Scott Piercy to win the 2018 Zurich Classic of New Orleans title by one stroke over Jason Dufner and Pat Perez, and also won the tournament before it became a team event in 2013. Horschel and Burns finished in a tie for fourth at New Orleans last year. Burns won the Valspar Championship a week later.

8. Joaquin Niemann-Mito Pereira, Chile – Two of the rising stars in the world are playing on the same team for the second time as they represented Chile in the 2021 Olympic Games in Japan, with Pereira tying for third and losing out on a playoff for the Bronze Medal, and Niemann tying for 10th. Niemann has nine victories as a professional, Pereira has eight.

9. Harold Varner III-Bubba Watson, United States – Two-time Masters champion Watson also won the 2011 Zurich Classic of New Orleans before it was a team event and finished in a tie for eighth with Scottie Scheffler last year. Varner III, who is making his debut in the team event, has two pro victories and tied for third in the RBC last week after tying for sixth in The Players.

10. Danny Willett-Tyrrell Hatton, England – Willett, the 2016 Masters champion, and Hatton tied for eighth in the Zurich Classic last season. Both Englishmen have won six times around the world, once each on the PGA Tour, and have team experience in the Ryder Cup, Willett in 2016 and Hatton in 2018. 2022 Euro Cup captain Henrik Stenson will have one eye on this team.

2. Kiradech Aphibarnrat, Thailand-Kurt Kitayama, United States – Aphibarnrat has won 12 times around the world, while Kitayama won twice on DP World Tour, once on the Asian Tour.

3. Matthew NeSmith-Taylor Moore, United States—Moore has won three times on lower tours, while NeSmith on 2019 Korn Ferry Tour and finished T-3 in the Valspar this season.

4. Raphael Cabrera-Bello, Spain-Emiliano Grillo, Argentina – Cabrera-Bello has won seven times around the world, while Grillo has won twice, including the 2016 Frys.com Open.

5. Matt Wallace-Sam Horsfield, England – Wallace has collected 10 victories on pro tours around the world, while Horsfield won twice on the DP World Tour two seasons ago.