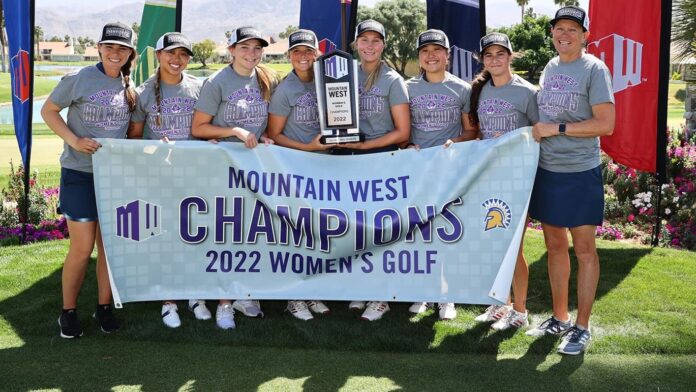 Natasha Andrea Oon of San Jose State captured the individual title and led the Spartans to a record-breaking victory in the Mountain West Conference Championship on the Dinah Shore Tournament Course at Mission Hills Country Club in Rancho Mirage.

The Spartans set Mountain West records for low score and margin of victory in the conference championship and there might be more to come as all five of the top Spartans have at least one college season remaining.

“It’s just awesome,” San Jose State Coach Dana Dormann said. “We’ve been wanting this for so long, been trying for this, and I’m so proud of them. It was a great field but we set records left and right, we were looking to extend that lead every day and just kept going.

“(Oon) was so steady, came back from her injury last year, just all she accomplishing this year is just incredible and I’m so proud of her.”

Oon, a senior from Malaysia, finished in the top 10 for her eighth consecutive tournament and claimed her third college title and first of this season by making a birdie on the final hole to wind up at 65-70-71—206, 10-under to win by seven shots, as her Spartan teammate Lucia Lopez-Ortega was second at 68-73-72—213.

“It feels really good,” said Oon, who set Mountain West records for low score and margin of victory in the championship finals. “It was great to set those and records, but most importantly to help the team win.

“I had a good mental state from the start of the tournament and was just trying to keep myself in that space, but I was able to really go low and it was great to finish with a birdie to get the job done.”