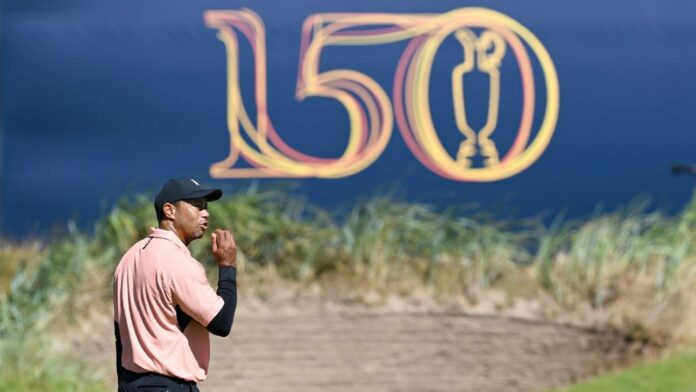 The 150th Open Championship this week on the famed Old Course at St. Andrews in Scotland will have the attention of people the world over, many of them to watch perhaps the greatest golfer of all-time and without question of this generation—Tiger Woods.

The 46-year-old Woods, who nearly lost his right leg in a rollover accident in his SUV in February of 2021, still has limitations in the leg and skipped the U.S. Open last month to make sure he would be able to play in the final major of the year.

“This is a pretty historic Open that we are going to be playing,” Woods told Golfweek. “I’m lucky enough to be part of the past champions who have won there, and want to play there again, and I don’t know when they are ever going to go back while I’m still able to play at a high level. I want to be able to give it at least one more run at a high level.

“ … It’s been hard, but it’s been worth it. I’ve had some very difficult days and some days which moving off the couch is a hell of a task, and that’s just the way it is. I have my own two legs, which I tell you, I’m not going to take it for granted anymore, some people do. But people who have come close or lost a limb understand what I’m saying, but you have difficult days and also you have great days.

“The plan was to play the U.S. Open, but physically I was not able to do that. No way physically I could have done that. I had some issues physically with my leg and it would have put (the 150th Open) in jeopardy. There was no reason to do that.”

Woods showed up in the United Kingdom last week to play in the 36-hole JP McManus Pro-Am at Adare Manor Golf Club in Limerick, Ireland, and finished in a tie for 39th at 77-74—151, 7-over-par, in his first competitive golf since withdrawing after the third round of the PGA Championship after struggling to walk the course and shooting 79 on Saturday.

The crowd chanted: “Tiger, Tiger,” as he left the Adare Manor course.

Woods also played a round with Rory McIlroy of Northern Ireland ay Ballybunion Golf Club in County Kerry during the week.

Then Woods arrived at St. Andrews on Saturday and walked the Old Course in addition to hitting some balls on the driving range before playing an 18-hole practice round with Justin Thomas on Sunday. He played only nine-hole practice rounds ahead to the Masters, in which he finished 47th,  and the PGA earlier this year.

Woods has claimed 15 major championships, second to Jack Nicklaus’ 18, among his 82 PGA Tour victories, tied with Sam Snead for the all-time record. Tiger has won the Open Championship three times, in by eight strokes in 2000 and by five 2005 at St. Andrews, and in 2006 at Royal Liverpool Golf Club in Hoylake, England.

“It’s something that’s near and dear to my heart,” Woods said of St. Andrews. “I’ve won two Opens there, it’s the home of golf and it’s my favorite golf course in the world. I wouldn’t miss that one.

“I was fortunate to complete the Career Grand Slam on the Old Course in 2000. … As for this week, I’ll just go out there and play the best I can and hope it’s good enough to put me in contention on the back nine on Sunday.”

As for the future Woods said: “I think something that is realistic is playing the Tour one day—never full-time, ever again—but pick and choose, just like Mr. (Ben) Hogan did. Pick and choose a few events a year and you play around that.”

And there was no way Woods wouldn’t pick the 150th Open.

Woods won’t be among the favorites, except among the fans, as defending champion and eight-ranked Collin Morikawa, top-ranked Scottie Scheffler, fifth-ranked Xander Schauffele, second-ranked Rory McIlroy of Northern Ireland, third-ranked Jon Rahm of Spain, seventh-ranked Matt Fitzpatrick of England, fourth-ranked Patrick Cantlay and eighth-ranked Justin Thomas seem to be among the players to beat.

In the first three majors this year, Scheffler won the Masters, Thomas captured the PGA Championship and Fitzpatrick claimed the U.S. Open, but especially since it’s 150th edition, the Open Champion seems to be the most coveted of them all.

1. Xander Schauffele, United States – The 2021 Olympic Gold Medalist has risen to No. 5 in the world by winning the Travelers Championship and the Genesis Scottish Open, plus the unofficial JP McManus Pro-Am in his last three starts. Schauffele has nine top-10 finishes in the majors and led the 2018 Open Championship before closing with a 74 to tie for second.

2. Rory McIlroy, Northern Ireland – The second-ranked McIlroy is a four-time major winner, but his last title in the Grand Slam events was in 2014 PGA Championship. One of his major titles came in the 2014 Open Championship at Royal Liverpool, and he has five top-10 finishes in the event. Rory has 33 pro victories, including the CJ Cup and Canadian Open this season.

3. Scottie Scheffler, United States – With four victories this season, Scheffler has risen to the No. 1 ranking in the world and leads the FedEx Cup point standings by a wide margin. He claimed his first major title by winning the Masters by three strokes over Rory McIlroy in April and has six top-10 results in the Grand Slam events after tying for second in the U.S. Open.

4. Collin Morikawa, United States – The defending champion in the Open Championship claimed his second major title when he beat Jordan Spieth by two strokes last year at Royal St. George’s. The eighth-ranked Morikawa also won the 2020 PGA Championship at TPC Harding Park in San Francisco, but hasn’t won this season, although he has seven finishes in the top 10.

5. Jon Rahm, Spain – The third-ranked Rahm earned his first major championship in the 2021 U.S. Open at Torrey Pines and has nine top-10 finishes in the Grand Slam events. Rahm’s best result in the Open Championship was a tie for third last year at Royal St. George’s. He claimed his seventh PGA Tour victory in the Mexico Open in May, one of six top-10 results this season.

6. Patrick Cantlay, United States – Coming off a tie for fourth in the Scottish Open, the fourth-ranked Cantlay ranks among the best players in the world without a major title. His best result in the Grand Slam events was a tie for third in the 2019 PGA Championship and his top finish in the Open was a tie for 12th in 2018. The 2021 FedEx champion has eight top-10s this season.

7. Matt Fitzpatrick, England – The U.S. Open champion, who claimed his first major title by one stroke at The Country Club in Brookline, Mass., last month, also tied for fifth in the PGA Championship and tied for 14th in the Masters this year. The 10th-ranked Fitzpatrick’s best finish in six appearances in the Open Championship was a tie for 20th in 2019 at Royal Portrush.

8. Justin Thomas, United States – The seventh-ranked Thomas captured his second PGA Championship in May and also tied for fifth in the Masters this year, giving him seven top-10 results in the majors in his career. He has nine top-10 finishes this season, including third three times, and his best finish in five starts in the Open Championship was a tie for 11th in 2019.

9. Cameron Smith, Australia – With victories this season in the Sentry Tournament of Champions and the Players Championship, the so-called fifth major, and a total of six top-10 results, Smith has risen to No. 6 in the world. His best result in the majors was a tie for second in the 2020 Masters, and his best finish in the Open Championship was a tie for 20th in 2019.

10. Jordan Spieth, United States – After struggling the last few seasons, Spieth claimed his 13th PGA Tour victory in the RBC Heritage and has two runner-up finishes this season, and is coming off a tie for 10th in the Genesis Scottish Open. He has claimed three major title, winning the Masters and the U.S. Open in 2015 before claiming the Open in 2017 at Royal Birkdale.

1. Cameron Young, United States – A two-time winner on the Korn Ferry Tour, the rookie has finished second three times this season on the PGA Tour. Makes Open debut after T-3 in  PGA.

2. Haotong Li, China – Seven-time winner as a pro recently won the BMW International in Germany with a 50-foot birdie putt on the first playoff hole. Finished T-3 in the 2017 Open.

3. Joohyung Kim, South Korea – Coming off a solo third in the Scottish Open, Kim also was 23rd in the U.S. Open. A six-time winner as a pro, he is making his Open Championship debut.

4. Sahith Theegala, United States – The former Pepperdine All-American has finished T-2 in the Travelers, T-3 in the Phoenix Open and T-5 in the Memorial. In Open Championship debut.