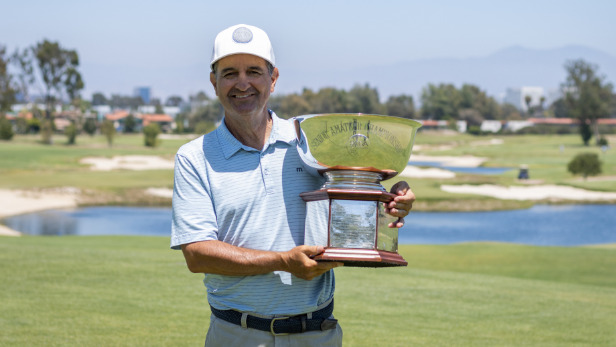 Tim Hogarth of Northridge simply added to his long list of tournament titles.

The 56-year-old Hogarth led virtually all the way and coasted to a 13-stroke victory over Jeff Burda of La Quinta in the 45th Southern California Golf Association Senior Amateur Championship at Santa Ana Country Club.

Hogarth was coming off a missed cut in the 67th U.S. Senior Amateur Championship at The Kittansett Club in Marion, Mass., where he shot 82-82—164.

“My confidence was pretty low,” said Hogarth, who was making his debut in this event after winning the SCGA Mid-Amateur four times and earning three SCGA Player of the Year awards. “I had a little bit of a hole I needed to dig out of, so this tournament really helped me. It meant a lot to play the way I did.

“Typically those (huge) leads don’t happen unless I feel very strongly about my game. I putted pretty well. That certainly isn’t the strongest part of my game, but I made a lot of putts.”

The top 10 finishers earned exemptions into the 2022 California Senior Amateur Championship in November at Pasatiempo Golf Course in Santa Cruz and the 2023 SCGA Senior Amateur at Ironwood Golf Club in Palm Desert.