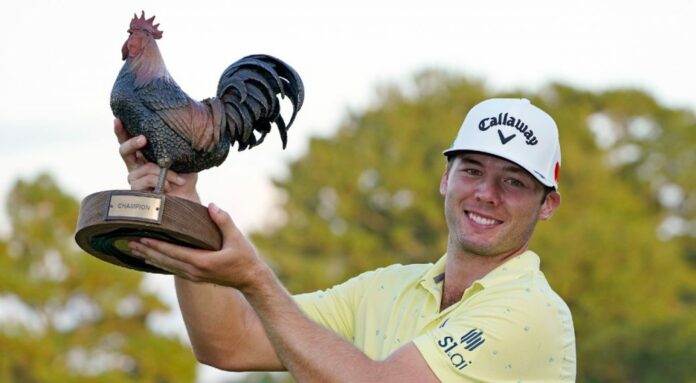 Sam Burns was simply another promising player on the PGA Tour a year ago before he claimed his second victory on the circuit by one stroke over Nick Watney and rookie Cameron Young in the Sanderson Farms Championship at the Country Club of Jackson in Jackson, Miss.

The 26-year-old Burns, from Shreveport, La., who played college golf at LSU, went on to win the Valspar Championship for the second time and the Charles Schwab Challenge later in the season in addition to helping the United States win the 14th Presidents Cup last weekend.

“Obviously a rooster is kind of cocky, so I had a little fun with that,” Burns said with a big smile when talking about of the trophy he received for winning the Sanderson Farms, “It’s got a bit of a cocky attitude. It’s kind of looking you in your face with a: ‘Yeah! What do you want?’ kinda attitude. I like that.

“This has always been one of my favorite events on the PGA Tour. I always enjoy coming here and being close to home, and for (this tournament) to give me that opportunity (with a sponsor exemption) as a kid coming out of college, it meant a lot to me.

“God willing I’ll be able to play here for the next 20 years, and it will always have a special place in my heart.”

This is the second event of the new PGA Tour season after Max Homa won the Fortinet Championship for the second straight year on the North Course at Silverado Resort and Spa two weeks ago.

1. Sam Burns, United States – Played much better than his 0-3-2 record in the Presidents Cup indicates, helping the U.S. team claim the trophy again, as Captain Davis Love put him out there in all five sessions. Burns claimed the first of his three victories last season in the Sanderson Farms, giving him four titles on the PGA Tour and he is No. 12 in the World Golf Rankings.

2. Sahith Theegala, United States – The former Pepperdine star started the new season by tying for sixth in the Fortinet Championship. Theegala still has yet to win as a pro, but last season as a rookie on the PGA Tour he finished in the top 10 five times, tying for second in the Travelers, tying for third in Phoenix and tying for fifth in the Memorial to reach the Tour Championship.

3. Christiaan Bezuidenhout, South Africa – Coming off a 1-0-1 record for the International team in the Presidents Cup after beating Kevin Kisner in singles, Bezuidenhout has won seven times around the world as a pro. He posted 10 finishes in the top 10 on the PGA Tour last season, including a tie for second in the John Deere Classic and a tie for 14th at Pebble Beach.

4. J.T. Poston, United States – Led virtually from wire-to-wire to claim his second PGA Tour victory last season the John Deere Classic, also tied for second in the Travelers and tied for third in the RBC Heritage among 10 results in the top 25. Poston, who also won the 2019 Wyndham Championship, tied for ninth last year in his fifth start in the Sanderson Farms Championship.

5. Sebastian Munoz, Colombia – Recorded a 2-0-1 record for the International Team in the Presidents Cup, upsetting top-ranked Scottie Scheffler, 2 and 1, in singles. Munoz claimed his only PGA Tour victory, one of his four as a pro, in the 2020 Sanderson Farms Championship. Last season, he was third in AT&T Byron Nelson and the RSM Classic, and fourth in the Zozo.

6. Scott Stallings, United States – Claimed the second of his three PGA Tour victories in what is now the Sanderson Farms Championship in 2012 by shooting 64-64 in the middle rounds, and also tied for sixth two years ago among his eight appearances in the tournament. Stallings had seven top-10 results last season, including second in the BMW, and two ties for fourth.

7. Denny McCarthy, United States – In addition to winning the 2018 Korn Ferry Tour Championship for his only pro victory, McCarthy has recorded 15 top-10 finishes on the PGA Tour in the last few seasons, with his best a tie for third in the 2021 Honda Classic. He recently tied for 25th in the Fortinet Championship, and he tied for sixth in the 2020 Sanderson Farms.

8. Davis Thompson, United States – Thompson has won three times as a pro, including the 2020 3M Open and the 2013 Honda Classic on the PGA Tour. In his only start in the Sanderson Farms Championship, he tied for 35th last year, closing with a 67. He tied for fifth at the Sony Open in Hawaii last year and also tied for fifth in the 2021 American Express Championship.

9. Taylor Montgomery, United States – Opened the new season with a solo third in the Fortinet Championship, shooting 64 in the final round. Montgomery, who captured the Nevada Open in 2020 and 2021, finished second twice on the Korn Ferry Tour in 2022 among nine top-10 finishes. He is making his tournament debut in the Sanderson Farms Championship.

10. Sepp Straka, Austria – After winning the 2018 KC Golf Classic on the Korn Ferry Tour for his first pro victory, Straka broke through on the PGA Tour by capturing the Honda Classic last season. That was one of his five finishes in the top 10, including a solo second in  the FedEx St. Jude, a tie for third in the RBC Heritage and a tie for seventh in the Tour Championship.

2. Stephen Jaeger, Germany – The six-time winner on the Korn Ferry Tour finished solo fifth in the Rocket Mortgage and also tied for sixth in the Wells Fargo on the PGA Tour last season.

3. David Lipsky, United States – A four-time winner as a pro, including the 2021 TPC San Antonio Challenge on theKorn Ferry Tour, on which he also finished second three times.

4. Zecheng Dou, China – A seven-time winner as a pro, including three on the Korn Ferry Tour and four on the PGA Tour China, Dou finished T-21 recently in the Fortinet Championship.

5. Matthew NeSmith, United States – Claimed his only pro victory in the 2018 Albertsons Boise Open on the Korn Ferry Tour and was T-3 in the Valspar and T-4 in Zurich last season.