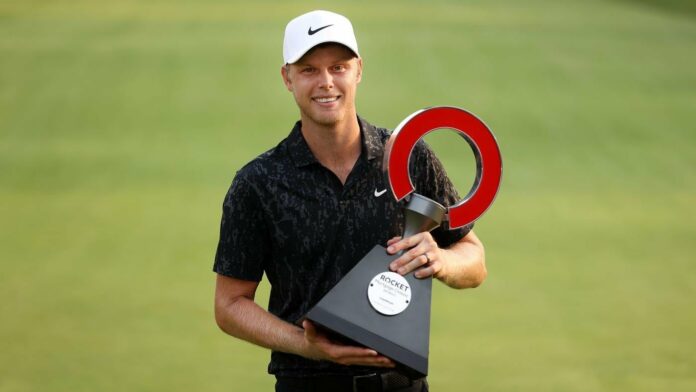 The Rocket Mortgage Classic, which tees off Thursday at Detroit Golf Club in Detroit, Mich., is the second-to-last event of the PGA Tour regular season and many players are battling to get into the top 125 in the FedEx Cup rankings to qualify for the playoffs.

Zalatoris and Young have yet to win on the PGA Tour, but they have been so close, so many times that this might be the week for one of them to break through.

Cam Davis of Australia (pictured), who had won twice on lower tours, was in that position last year when he held off Joaquin Nieman of Chile and Troy Merritt with a par on the sixth playoff hole to claim his first PGA Tour victory.

“Every year I was trying to try to come back, because I love this golf course, thinking: ‘Can I just do a little bit better?’” the 27-year-old Davis told the Detroit Free Press recently when talking about the Donald Ross-designed course. “And obviously, last time I did as well as you can do. The tournament had grown each time I’d played out here as well. I’d say it’s a pretty accurate statement. It’s growing as well as I am.

“The greens are terrific and difficult. It’s synonymous with a lot of the best golf courses around this country, and I feel like guys jump at the opportunity to play golf courses like this. And it’s just cool to see a lot of big names coming out and giving it a crack, because it is a good test.”

Among the Monday qualifiers were Erik Flores of Grass Valley and UCLA, and KK Limbhasut of Thailand and Cal.

1. Patrick Cantlay, United States – The fourth-ranked Cantlay teamed with Xander Schauffele to win the Zurich Classic of New Orleans, but doesn’t have an individual title after winning four times a claiming the FedEx Cup last year. He does have nine top-10 finishes and is sixth in the FedEx Cup standings. Cantlay is making his first appearance in the Rocket Mortgage Classic.

2. Tony Finau, United States – Coming off the third PGA Tour victory of his career last week in the 3M Open, Finau has four top-10 finishes this season, including second in the RBC Canadian Open and a tie for second in the Mexico Open at Vidanta. He was in the top 20 after three rounds in his only start in the Rocket Mortgage in 2019, but closed with a 74 and slid to a tie for 54th.

3. Cam Davis, Australia – The defending Rocket Mortgage Classic winner tied for eighth in the John Deere Classic, finished solo sixth in the Barracuda Championship and tied for 16th in the 3M Open in his last three starts, and has five top-10 finishes on the PGA Tour this season. Davis made a par on the sixth playoff hole to beat Troy Merritt and Joaquin Nieman last season.

4. Will Zalatoris, United States – The 2020-21 PGA Tour Rookie of the Year still has not won on the circuit, but has finished second three times this season, including in the U.S. Open and the PGA Championship among eight top 10 results and is ninth in the FedEx Cup standings. In his only start in the Rocket Mortgage, Zalatoris broke 70 only once and finished 77th last season.

5. Danny Willett, England – The 2016 Masters champion comes off a tie for seventh in the 3M Open last week and captured the Alfred Dunhill Links Championship on the Old Course at St. Andrews early this season in addition to winning the 2018 DP World Tour Championship. Willett makes a third start in the Rocket Mortgage and tied for fourth by closing with 66 in 2019.

6. Emiliano Grillo, Argentina – Was near the lead all the way in the 3M Open last week before finishing in a tie for second, his second runner-up result this month, as he also tied for second in the John Deere Classic. Grillo, whose only PGA Tour victory came in the 2016 Frys.com Open, tied for 39th in the Rocket Mortgage Classic two years ago before missing the cut last season.

7. Scott Piercy, United States – After leading the 3M Open most of the way last week, a triple-bogey on the back nine Sunday derailed Percy and he tied for fourth. He has six top-25 finishes this season, including a tie for 11th in the Fortinet Championship and a tie for 12th in the RBC Heritage. Shot 75-71 to miss the cut by four shots in his only Rocket Mortgage start last year.

8. Chesson Hadley, United States – Hadley was in the chase most of the way last week in the 3M Open before he faded on the back nine in the final round and finished solo 10th. He also finished fifth in the Travelers and tied for 10th in the John Deere Classic recently. A five-time winner as a pro, he tied for 52nd in the Rocket Mortgage last year after missing the cut twice.

9. Callem Tarren, England – In addition to closing in on retaining his PGA Tour card for next season, Tarren seems to be getting closer to his first professional victory as he has tied for fifth in the Puerto Rico Open, tied for sixth in the John Deere Classic and tied for seventh in the 3M Open after contending all the way each time. He is making his Rocket Mortgage Classic debut.

10. James Hahn, United States – The former Cal star from Alameda closed with a 65 last week to tie for fourth in the 3M Open after posting ties for ninth in the AT&T Byron Nelson and the Wells Fargo Championship earlier this season. Hahn, who has won twice on the PGA Tour, is makes a third appearance in the Rocket Mortgage Classic after missing the cut the last two years.

1. Cameron Young, United States – Rookie of the Year candidate has yet to win, but was second three times, including in the Open Championship. Makes Rocket Mortgage debut.

5. Cole Hammer, United States – Rookie from 2022 national champion Texas won the 2021 Big 12 championship among seven amateur victories and is making his second start as a professional.