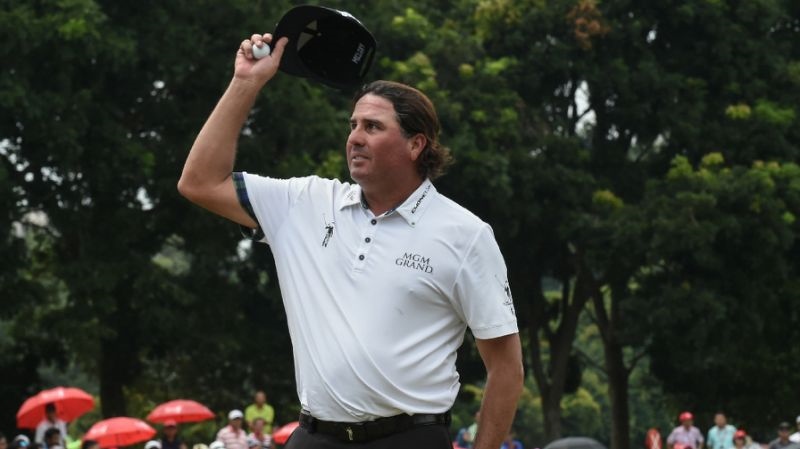 LIV Golf has added to its another enticement for some of the top golfers in the world to defect from the PGA Tour and the DP World Tour by adding an all-inclusive private jet with a well-stocked bar that will take participants to all of its tournaments.

Pat Perez of San Diego (pictured), who has defected from the PGA Tour to LIV, was the featured star in a video making the rounds on TikTok and Twitter for the last few days before it was taken down last Thursday.

Perez sang the hit “We Are the Champions,” a huge hit by the popular music group Queen, on the video.

The 46-year-old Perez, who has three victories on the PGA Tour including his last in the 2017 CIMB Classic, finished at 69-73-80—202, 6-over-par, recently in the LIV tournament at Pumpkin Ridge Golf Club in North Plains, Ore., near Portland, and earned $900,000 in addition to the huge signing bonus he received.

“This has been like hitting the lottery for me,” said Perez, who also won the 2009 Bob Hope Classic and the 2016 OHL Classic at Mayakoba.

Also among those shown on the video of the flight to Portland for the tournament in were major champions Brooks Koepka and his new wife, Jena Sims, in addition to Dustin Johnson, the top-ranked player among the LIV players at No. 17 in the world.

Crystal Cruises’ luxury Boeing 777 Crystal Skye is the jet taking the LIV Golf players to their destinations for Saudi-backed tour, which has described itself as “golf, but louder.”

The next LIV Golf event will be played this week, from Thursday through Saturday at Trump National Golf Club Bedminster in Bedminster, N.J. LIV tournaments are played over 54 holes, rather than the 72 of the PGA Tour.

There have been rumors that Cameron Smith of Australia, who recently won the 2022 Open Championship on the Old Course at St. Andrews, would jump to LIV but he has not publicly committed to the new golf organization.

LIV received a setback on Monday when Sergio Garcia of Spain, the 2017 Masters champion who had previously committed to LIV Golf, said he had changed his mind and would remain with the DP World Tour because he hopes to play in future Ryder Cups.