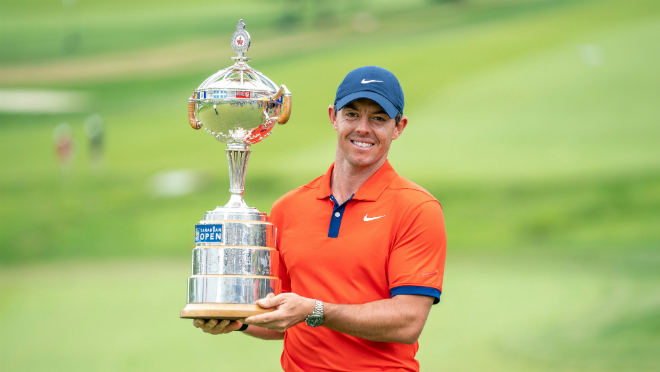 While the LIV Golf International Series gets is start this week in London, the RBC Canadian Open will be played for the first time since 2019 at St. George’s Golf and Country Club in Etobicoke, Ontario, Canada.

The tournament was not played the last two years because of the Covid-19 virus, after Rory McIlroy of Northern Ireland won the RBC title three years ago by seven strokes over Webb Simpson and Shane Lowry of Ireland at Hamilton Golf and Country Club in Ancaster, Ontario, Canada.

“It certainly is going to be different,” said the eighth-ranked McIlroy, who has won 20 times on the PGA Tour. “It’s funny, it doesn’t feel as long as three years ago. I guess the memories are still pretty vivid. It will feel different going to a different golf course. Regardless of winning the tournament or not, I had a really good time when I did play in Canada last.

“We had great weather for the week. It was just a really, really nice week. But yeah, it will be nice to defend. I think one of the really cool things about winning a tournament is being able to go back and defend the next year. It’s a nice thing to do. It was my first time playing in Canada and I had a wonderful experience and I’ve wanted to get back.

“Obviously with Covid-19, that wasn’t a possibility over the last couple years, but finally things are getting back to normal and I’m excited to get back up there.”

McIlroy, who was 5-under-par through seven holes in the final round, was flirting with a 59 for most of the final round before making bogeys on the 16th and 18th holes to finish with a 9-under par 61 and a 72 hole total of 22-under 258.

Since then, McIlroy has three more victories including the 2020 WGC-HSBC Champions and the CJ Cup at the Summit this season and, and now has 20 victories in his PGA Tour career.

“I think the whole Sunday (in the 2019 RBC Canadian Open) in general was special,” said McIlroy, who has finished second in the Masters and eighth in the PGA Championship this season. “I had won the Players in March in 2019 and I’d had a lot of other chances to win. I was leading going into the final round at Quail Hollow and didn’t get the job done. There were a bunch of tournaments where I played in final groups and just didn’t win.

“I was tied for the lead going into the last day (in Canada) and I sort of went out with the attitude of, ‘I’m either going to shoot 64 or 74 here.’ I’m just going to be super aggressive and go for everything and luckily that mindset and that attitude worked out for me.

“…  It was as a really cool atmosphere to play in. I think people started to realize I was not only probably going to win the tournament, but I had the chance to shoot 59, which was really cool, and people were getting behind that as well. It was a fun final day.”

While Dustin Johnson, Phil Mickelson and other PGA Tour stars are going to be playing in the LIV event in London, McIlroy will be playing in Canada along with the likes of top-ranked Scottie Scheffler, fourth-ranked Cameron Smith of Australia, sixth-ranked Justin Thomas, ninth-ranked Sam Burns, Shane Lowry of Northern Ireland, Matt Fitzpatrick of England, Corey Conners of Canada, Jhonattan Vegas of Venezuela, Tyrell Hatton of England and Martin Laird of Scotland.

It will be interesting to see who draws the most interest from golf fans around the world.

1. Rory McIlroy, Northern Ireland—The eighth-ranked McIlroy won the RBC Canadian Open the in 2019, shooting 9-under-par 61 in the final round to beat Webb Simpson and Shane Lowry of Ireland by seven strokes for one of his 20 PGA Tour victories. He won the CJ Cup among five top-10 results this season, including second in the Masters and eighth in the PGA Championship.

2. Scottie Scheffler, United States – The top-rankedplayer in the world has won four tournaments this season, including the Masters, and finished second recently in the Charles Schwab Challenge for his eighth top-10 finish in 2021-22, in addition to a tie for second in the Houston Open. Scheffler is making his first appearance of his career in the RBC Canadian Open.

3. Justin Thomas, United States – JT, ranked sixth in the world, missed the cut last week after winning the PGA Championship for the second time, and has finished in the top 10 on eight occasions this season—including a tie for eighth in the Masters. Thomas tied for 20th in his only appearance in the RBC Canadian Open in 2019, shooting 65-69-69 in the last three rounds.

4. Cameron Smith, Australia – The fourth-ranked Smith won the Players Championship and the Sentry TOC this season among five top-10 finishes, including a tie for third in the Masters, in addition to tying for 13th in both the PGA Championship and the Memorial Tournament recently. He has not played well in the RBC Canadian Open, missing the cut in 2016 and 2017.

5. Corey Conners, Canada – Conners, whose only PGA Tour victory came in the 2018 Valero Texas Open, has played well in big events this season by finishing third in the WGC-Dell Technologies Match Play and tying for sixth in the Masters. However, he has not played well at home, as he has missed the cut in five of his six appearances in the RBC Canadian Open.

6. Shane Lowry, Ireland – The 2019 Open champion has tied for third in the Masters and the RBC Heritage this season, in addition to finishing solo second in the Honda Classic among seven finishes in the top 25 on the PGA Tour. Lowry is playing in the RBC Canadian Open for the third time and tied for second in 2019 with four rounds in the 60s, and also tied for 12th in 2018.

7. Sam Burns, United States – The ninth-ranked Burns has won the Sanderson Farms Championship, the Valspar Championship and the Charles Schwab Challenge (in his last start) among seven finishes in the top 10 this season, and now has four PGA Tour victories in his career. He will be making his tournament debut in the RBC Canadian Open this week.

8. Jhonattan Vegas, Venezuela – Vegas claimed two of this three PGA Tour victories in the RBC Canadian Open, winning by one stroke over Dustin Johnson, Jon Rahm and Martin Laird in 2016, and repeating the next year with a birdie on the first playoff hole to beat Charley Hoffman. His best result this season was a tie for fourth in the Corales Puntacana Championship.

10. Luke List, United States – After winning twice on the Korn Ferry Tour, List claimed his first victory on the PGA Tour this year with a birdie on the first playoff hole to beat Will Zalatoris in the Farmers Insurance Open, tied for seventh in the Zozo and tied for 10th in the RSM Classic. His best results in the RBC Canadian Open were a tie for 14th in 2016 and a tie for 21st in 2013.

1. Sahith Theegala, United States –The former Pepperdine All-American is coming off a T-5 in the Memorial and also was T-3 in Phoenix, T-7 in the Valspar, T-8 in the Sanderson Farms.

2. Michael Gligic, Canada – Winner on the PGA Tour Canada and the Korn Ferry Tour will be one of the home favorites this week and was T-24 in the Mexico Championship recently.

3. Satoshi Kodaira, Japan – A nine-time winner around the world, including in the 2018 RBC Heritage, Kodaira finished T-12 in the Sony Open and T-15 on the Mexico Open this season.

4. Dawie van der Walt, South Africa – Has won four times around the world, including twice on the Korn Ferry Tour, and finished T-22 in the Fortinet Championship this season.

5. Brandon Wu, United States – The former Stanford All-American won the 2021 Korn Ferry Tour Championship and this season was T-2 in the Mexico Open and T-3 in Puerto Rico Open.