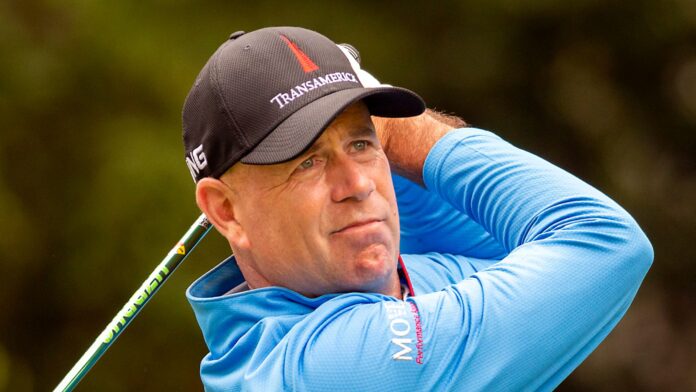 After an off-season of less than two weeks, the PGA Tour returns on Thursday with something called the Fortinet Championship.

Actually, it’s the old Safeway Open on the North Course at Silverado Resort and Spa in Napa, with Stewart Cink (pictured) back to defend the title he won last year against a field that includes top-ranked Jon Rahm of Spain.

Rahm, the reigning U.S. Open champion, is coming off a runner-up finish to Patrick Cantlay in the Tour Championship, and also teeing it up at Silverado are Masters champion Hideki Matsuyama of Japan and PGA champion Phil Mickelson.

Collin Morikawa, who captured the Open Championship at Royal St. George’s in England is the only reigning major champion taking a pass on the Fortinet Championship, perhaps because of a back injury that hampered him during the Tour Championship.

Other former champions in the field at Silverado this week include Cameron Champ of Sacramento, Kevin Tway, Jimmy Walker, Emiliano Grillo of Argentina, Jonas Blixt of Sweden and Brendan Steele of Idyllwild and UC Riverside, who claimed the title in 2016 and 2017.

The 48-year-old Cink, who has won eight times on the PGA Tour, resurrected his career last season by winning the Safeway Open and the RBC Heritage after a victory drought that stretched back to the 2009 Open Championship at Turnberry Resort in Scotland, where he beat Tom Watson by six strokes in a four-hole playoff for his only major title.

“I don’t know if I have words, it just keeps getting better,” said Cink after winning the RBC Heritage with his son, Reagan, on the bag and his wife, Lisa in the gallery. “Winning with Reagan caddying back in the fall (at Silverado) was amazing, but Connor (his other son) couldn’t be there. It was his birthday, so today he just flew in, changed his flight from Wyoming to be here just for this, and there’s no way I was going to not win with him coming all the way down here.

“We had the same game plan that we’ve had for every round that we’ve had since the first tournament Reagan caddied for me back in Napa. We don’t choose defense or aggression. We don’t like those terms very much. We choose the right shot on the hole. There’s some holes that say, ‘This is a red light’ and there’s some holes that say, ‘This is a green light.’ We do a good job I think identifying where those are, and we play to those.

“It worked at Safeway, it worked here this week. I look forward to the rest of the year with him caddying. I might just retire when he stops caddying. How can I top this?”

Well, he could start by joining Steele as the only two-time winner of the tournament at Silverado.

1. Jon Rahm, Spain – The top-ranked player in the finished second in the Tour Championship for his sixth straight top-10 finish, including his first major victory in the U.S. Open, and wound up No. 2 in the FedEx Cup standings. Rahm, who will play for Europe in the Ryder Cup next week, played at Silverado only in 2016 and tied for 15th, opening with a 66 including an ace.

2. Hideki Matsuyama, Japan – The reigning Masters champion tied for fourth in the Olympics and tied for second in the WGC-FedEx St. Jude Invitational late last season before tying for 26th in the Tour Championship, slipping to 26th in the final FedEx standings. Matsuyama is playing at Silverado for the fifth time and tied for third in 2013 and 2014, and tied for 15th in 2017.

3. Webb Simpson, United States – After missing the Tour Championship for the first time since 2014, Simpson will try to get the new season off to fast start at Silverado. He did finish in the top 10 six times and the top 25 on 13 occasions last season. Simpson is making his sixth start in Napa, having tied for 13th in 2009 and tied for 17th the last time he teed it up there in 2017.

4. Kevin Na, United States – After finishing in the top 20 in all three playoff events, including solo third in the Tour Championship, Na was in the running for the Ryder Cup as a Captain’s Pick, but did not get the call. He had five top-10s and 10 25s, including a victory in the Sony Open last season. Na lost a playoff to Emiliano Grillo at Napa in 2016, one of three top-10s.

5. Marc Leishman, Australia – Another player who missed the Tour Championship and will try to get the new season off to a fast start in Napa. Teamed with Cameron Smith to win the Zurich Classic among four top-10s and eight top-25s last season to tie for 33rd in the standings. Closed with 67-65 to wind up solo third in 2019 at Silverado, where he is playing for the fifth time.

6. Stewart Cink, United States – The defending champion at Silverado followed that up by winning the RBC Heritage, his first two victories since the 2009 Open Championship and has eight PGA Tour victories in his career. Cink, who had three top-10s and eight top-25s last season, finished 26th in the Tour Championship and also 26th in the FedEx Cup standings.

7. C.T. Pan, Taiwan – Has three victories as a pro and highlighted his 2020-21 season by claiming the Bronze Medal in the Olympic Games when he won a seven-man playoff after finishing 66-66-63. Pan also tied for seventh in the Masters and tied for third in the Honda Classic last season. He has missed the cut in two of three starts in Napa and tied for 6lst last year.

8. Phil Mickelson, United States – Lefty will be at the Ryder Cup next week, but only as an Assistant Captain, because other than winning his sixth major title in the PGA Championship last season he didn’t have another top 10 and only four top-25s. Mickelson is playing at Silverado for the seventh time, with his best results a tie for third in 2017 and a tie for eighth the year before.

9. Cameron Champ, United States – After claiming the second of his three PGA Tour titles at Silverado in 2019, Champ decided not to defend his title last year because he was worn out after playing through the Tour Championship. He won the 3M Open and tied for eighth in the Zozo at Sherwood last year. Champ will be making his fourth start at Napa and also tied for 25th in 2018.

10. Brendan Steele, United States – The only two-time winner in the 14-year history of the Silverado event is playing in the tournament for the 11th consecutive year and also tied for 11th in 2007, tied for 17th in 2015 and tied for 21st in 2014. Steele’s best finishes last season were a tie for third in the Honda Classic and ties for fourth in the Zurich Classic and the Sony Open.