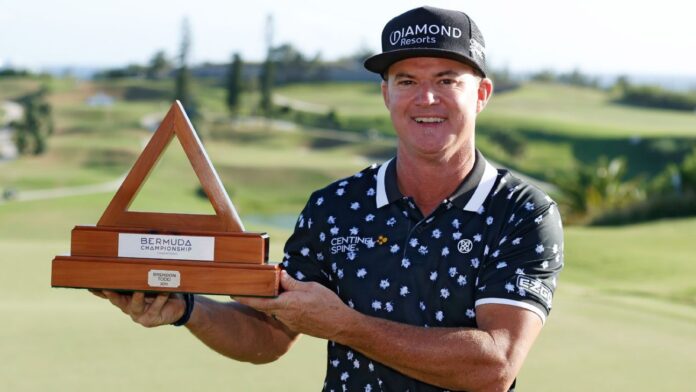 After a one-week trip to Japan for the Zozo Championship, the PGA Tour is back in Western Hemisphere this week for the Butterfield Bermuda Championship at Port Royal Golf Course in Southampton, Bermuda.

Defending champion Brian Gay closed with a 7-under-par 64 last year in Bermuda and then beat Wyndham Clark with a birdie on the first playoff hole to claim his fifth PGA Tour victory, but the first since the 2013 Humana Challenge.

“I was so happy and humbled to not only win, but to represent Bermuda,” said Gay (pictured), who also made a birdie on the final hole of regulation to force the playoff. “The beauty of the island and the amazing spirit of the residents will always be special to me and my family.

“Just kept at it. It’s a crazy game. You never know what’s going to happen. And it’s really hard to believe.”

Gay wasn’t so happy on Monday, when he and his wife, Kimberly, were bumped from their flight from Charlotte, N.C., because it was “too heavy,” airline officials claimed. Gay and another PGA Tour players who was not identified were asked to leave the plane because of the weight limitations.

The next flight from Charlotte to Bermuda wasn’t until Tuesday.

Gay, who tied for third in Bermuda two years ago when Brendon Todd won the first edition of the tournament, is no stranger to the winner’s circle despite the seven-year drought, as he won nine times on mini-tours around the United States.

Others in the field this week including Matt Fitzpatrick of England, who won on the European Tour two weeks ago, Patrick Reed, Jason Dufner, Danny Willett of England, Russell Knox of Scotland, Scott Stallings, Nick Watney, Ryan Armour, Adam Hadwin of Canada, Seamus Power of Ireland, Graeme McDowell of Northern Ireland and Nick Taylor of Canada.

For the winner, it will be worth the trip, even if he got bumped from his flight.

1. Matt Fitzpatrick, England – The 27-year-old Fitzpatrick is coming off his seventh European Tour victory two weeks ago in the Andalucia Masters and he also lost in a playoff at the Scottish Open this year, but has not won on the PGA Tour. He also tied for fourth in the RBC Heritage, tied for fifth in the Genesis and tied for ninth in The Players this year. Making Bermuda debut.

2. Patrick Reed, United States – Claimed his ninth PGA Tour victory early this year in the Farmers Insurance Open, has not had his A game lately, but he does have six top-10 finishes this season, including a tie for eighth in the Masters, and he also tied for 17th in the PGA Championship and tied for 21st in the U.S. Open. Reed is playing in Bermuda for the first time.

4. Stephan Jaeger, Germany – Has won six times on the Korn Ferry Tour, including twice last season, when Jaeger finished atop both the regular season and Tour finals by posted 13 finishes in the top 10. He tied for 26th in the Sanderson Farms Championship early this month and tied for 34th in the 2020 U.S. Open, despite shooting 79 in third round. Makes first start in Bermuda.

5. Seamus Power, Ireland – Captured sixth victory of his professional career and first on the PGA Tour earlier this year in the Barbasol Championship, beating J.T. Poston with a par on the sixth playoff hole. Power had four top-10 finishes and seven in the top 25, and recently tied for 21st recently in the Shriners Children’s Open. Tied for 31st and 37th last two years in Bermuda.

7. Christian Bezuidenhout, South Africa – Seven-time champion as a pro claimed three titles in 2020, in the Dimension Data Pro-Am, the Alfred Dunhill Championship and the South African Open. Bezuidenhout also finished seventh in the Arnold Palmer Invitational, tied for 30th in the PGA Championship and tied for 31st in the U.S. Open this year. Making his Bermuda debut.

8. Mito Pereira, Chile – The eight-time winner as a pro earned automatic promotion to the PGA Tour by winning three times on the Korn Ferry Tour last season, giving him eight victories as a pro. Pereira finished solo third in the Fortinet Championship to open the new season and tied for 31st in the Sanderson Farms Championship. He makes his first start in Bermuda Championship.

9. Ryan Palmer, United States – A four-time winner on the PGA Tour, Palmer was in the conversation at the Zozo Championship last week in Japan until he shot 73 in the final round to tie for 44th. He tied for second in the Farmers, tied for fourth in the Zozo and was solo fourth in the Sentry TOC in Hawaii last  season. He will play in Bermuda Championship for first time.

10. Brian Gay, United States – The defending champion in Bermuda won last year when he birdied the final hole of regulation to cap a 64 and beat Wyndham Clark with a birdie on the first playoff hole. Gay, who has won five times on the PGA Tour and 14 titles as a pro, also tied for third in the 2019 Bermuda Championship, six strokes behind tournament winner Brendon Todd.

1. Hayden Buckley, United States – A winner on the Canadian Tour and Korn Ferry Tour in recent seasons, Buckley was T-4 in Sanderson Farms and T-8 in Shriners for Children’s Open.

2. Garrick Higgo, South Africa – Has won seven times as a pro, including the Palmetto Championship on the PGA Tour last season. Higgo has won three times on European Tour.

3. Aaron Rai, England – With six victories as a pro, Rai earned his PGA Tour card for this season by finishing in top 25 of Korn Ferry Tour finals with a T-2 in Albertson’s Boise Open.