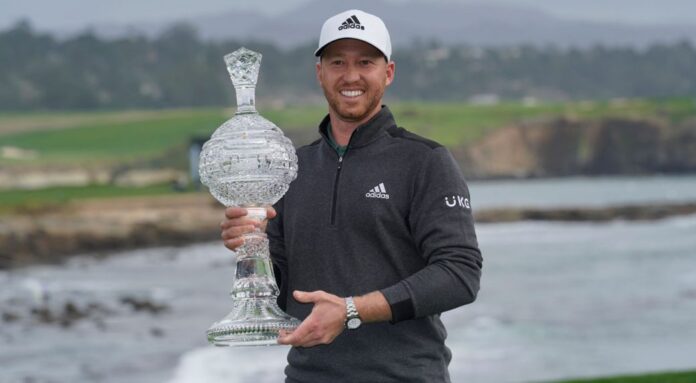 The PGA Tour is in California for the second of three straight week for the AT&T Pebble Beach Pro-Am, the 85th version of what started out as the Bing Crosby National Pro-Am, which was first played at Rancho Santa Fe Country Club in San Diego County in 1942.

The tournament is played at the famed Pebble Beach Golf Links, Spyglass Hill Golf Course and the Shore Course at Monterey Peninsula Country Club over the first three rounds, before the final day will be contested exclusively at iconic Pebble Beach.

“I think (winning at Pebble Beach) really solidified my position as one of the best golfers out here and I just need to continue to do the things I’ve been doing,” said Berger, who sank a 31-foot eagle putt on the final hole to close with a 7-under-par 65 that clinched the victory. “That was the best putt I’ve ever hit in my life.

“I was going to go down swinging. To step up there on the last hole and hit a great drive and then one of the best 3-woods I’ve ever hit in my life, and then to make that putt, is just as good as it gets for me.”

Berger is trying to become the first repeat winner at Pebble Beach since Johnson in 2009 and 2010.

That should give the tournament all the feel of the old Crosby Clambake.

1. Patrick Cantlay, United States –The reigning PGA Tour Player of the Year and FedEx Cup champion, ranked fourth in the world, started the new year by finishing fourth in The American Express and ninth in the Sentry Tournament of Champions. Cantlay tied for third last year at Pebble Beach after shooting 62 in round one, tied for ninth in 2013, and tied for 11th in 2020.

2. Jason Day, Australia – Coming off a tie for third last week in the Farmers Insurance Open, Day seems to have regained the form that led to 12 PGA Tour victories before a series of injuries set him back. He has finished in the top 10 eight times in 12 starts at Pebble Beach, his best a tie for second in 2018, fourth-place finishes in 2020, 2019 and 2015, and a tie for fifth in 2012.

3. Daniel Berger, United States – The defending champion at Pebble Beach eagled the second and 18th holes last year while shooting 7-under-par 65 in the final round to claim his fourth PGA Tour title by two strokes. Berger continued his strong form by starting the new year with a tie for fifth in the Sentry TOC in Hawaii and a tie for 20th in the Farmers Insurance Open last week.

4. Paul Casey, England – Returning to the PGA Tour after finishing in a tie for 12th last week in the Dubai Desert Classic on the DP World Tour after being near the lead before closing with a 74, Casey also tied for 25th in the CJ Cup this season. He finished second behind Phil Mickelson at Pebble Beach in 2019, tied for fifth last season and wound up in tie for eighth in 2018.

5. Nick Taylor, Canada – Claimed his second PGA Tour victory in 2020 at Pebble Beach by opening with a 9-under-par 63 and eventually winning by four strokes over Kevin Streelman. Taylor, who also tied for 10th at Pebble in 2017, could only manage a tie for 39th in his title defense last year. His other PGA Tour title came in the 2015 Sanderson Farms Championship.

6. Will Zalatoris, United States – The 2021 PGA Tour Rookie of the Year came close to his first victory on the circuit when he finished second in the Farmers Insurance Open last week. Zalatoris has 10 top-10 finishes and 18 in the top 25 in the last two seasons, including second in the 2021 Masters. He has yet to finish in the top 50 in two starts at Pebble, but is now on a roll.

7. Seamus Power, Ireland – The Irishman, who claimed his only PGA Tour victory in the 2021 Barbasol Championship, tied for third in the Sony Open in Hawaii, tied for fourth in the RSM Classic and has seven top-25 finishes this season. However, Power has missed the cut twice and not finished in the top 35 in his four starts at Pebble Beach and hopes to turn things around

8. Jordan Speith, United States – Spieth missed the cut in the Farmers last week, but tied for 18th in the CJ Cup and tied for 21st in the Sentry Tournament of Champions this season. He claimed one of his 12 PGA Tour victories at Pebble Beach in 2017, in addition to tying for third last year, tying for fourth in 2014, tying for seventh in 2015 and tying for ninth in 2020.

9. Justin Rose, England – Coming off a tie for sixth in the Farmers Insurance Open last week, Rose also tied for ninth in the Hero World Challenge and tied for 12th in the RSM Classic recently. A 22-time winner as a pro, including 10 on the PGA Tour, he tied for third in the 2019 U.S. Open at Pebble, and in the AT&T his best result in two starts was a tie for sixth in 2016.

10. Cameron Tringale, United States – Still seeking his first PGA Tour victory, Tringale tied for second in the Zozo Championship, tied for third in the Farmers Insurance Open, tied for seventh in the Houston Open and tied for 11th at Sanderson Farms this season. His best results in 10 starts at Pebble Beach were a tie for seventh last season, and a tied for 13th in 2014.

5. Austin Smotherman, United States – A two-time winner on lower pro tours in the last three years, Smotherman closed with a 66 to T-11 in Farmers. Another first-timer at Pebble Beach.