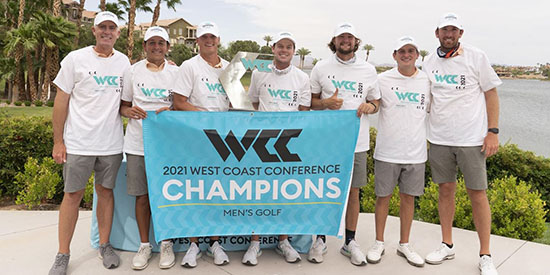 Clay Feagler beat Pepperdine teammate Dylan Menante on the second playoff hole to earn the individual title for the second time, and they led the Waves to a 24-stroke victory over Brigham Young in the 2021 West Coast Conference Men’s Golf Championships at Reflection Bay Golf Club in Henderson, Nev.

“Our conference gets better every year, so to pull it out like this, it means more and more to the program and our players,” said Pepperdine Coach Michael Beard, whose Waves won for the fifth time this season and collected a record 21st WCC title, 10 more than any other school. “We didn’t know exactly what to expect from the course. We knew that if the wind was down it was scoreable. It was a great course. It was a great experience for us.

“It’s a weird feeling when you have two players you want to win in the playoff, but they can’t. I’m really happy for Clay. Dylan’s a great player, he’s had such a great year, and I feel for him. But we’re happy to win as a team and to have the individual winner is special.”

“It’s kind of crazy, winning it back in 2018 and I didn’t know how big it was back then,” Feagler said after claiming his fourth college title. “But now being a two-time winner, it hits home more. You never want to face your teammate in a playoff, it’s the worst thing possible, but I was glad to come out on top today.

“The last four events, we’ve been trending the right direction. We’ve been playing well. Going to Regionals, we need to keep playing consistent golf and keep our composure and try to get top five.”