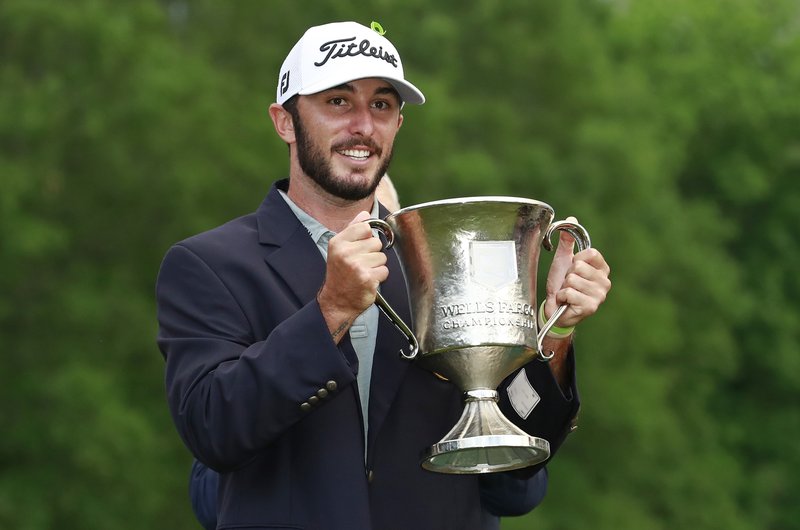 Max Homa is the latest PGA Tour player who finally will get the chance to defend a title he won in 2019 when the Wells Fargo Championship is played for the first time since then this week at Quail Hollow Club in Charlotte, N.C.

The Wells Fargo was another tournament cancelled because of the Coronavirus pandemic last year, but Homa (pictured) showed his victory was no fluke when he captured the Genesis Invitational at Riviera Country Club outside Los Angeles earlier this season.

“After much deliberation, I’ve decided to play in the 2021 Wells Fargo Championship,” Homa, from Valencia and Cal, said recently via Twitter. “I remember walking up (the 18th fairway) and how electric it was, how much fun it was. In real time, that’s very rare to be able to have that feeling. It felt like a dream.

“It’s the most disappointing thing that has happened for me during all that’s gone on, during all this turmoil (because of Covid-19). This was the biggest one that hurt. I was really excited to try and defend at Quail Hollow.

Tournament officials answered Homa’s post on Twitter with one of their own: “Committed! Excited to have our 2019 and defending Champion Max Homa back at Quail Hollow. Our 2010 & 2015 Champion Rory McIlroy is back as well, and Charlotte local Webb Simpson is joining the fun!”

Homa, who finished tied for sixth on Sunday in the Valspar Championship, will defend his title against a strong field loaded with players from the top 20 of the World Golf Rankings, including No. 2 Justin Thomas, No. 3 Jon Rahm of Spain, No. 4 Xander Schauffele, No. 5 Bryson DeChambeau, No. 7 Patrick Reed, No. 9 Webb Simpson, No. 11 Viktor Hovland of Norway, No. 12 Patrick Cantlay, No. 13 Tony Finau, No. 15 Rory McIlroy of Northern Ireland and No. 19 Sungjae Im of South Korea.

“This is a wonderful group of players who are committed to coming back to the Wells Fargo Championship,” Tournament Director Gary Sobba said. “We couldn’t be more pleased with the field … and are grateful to the players for supporting this event this year, in particular, and through the years.

“The hospitality of Quail Hollow Club, the spirit of the volunteers and the community is tremendous, and the players recognize this.”

Thomas, who won the 2017 PGA Championship at Quail Hollow, probably is the player to beat.