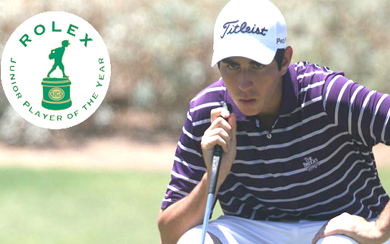 By AJGA
Paolucci earned the right to Rolex Junior Player of the Year accolades on the strength of wins at the Rolex Tournament of Champions and the Thunderbird International Junior. Additionally, he never finished outside the top 5 in any of the six junior golf events he participated in.
Introduced by the AJGA in 1978, the Rolex Junior Player of the Year award recognizes one boy and one girl who had the most outstanding year in junior golf events at the national level. Past recipients have gone on to become some of the most esteemed players on the PGA and LPGA Tours, including Tiger Woods, Phil Mickelson, Charles Howell III, Hunter Mahan, Scott Verplank, Cristie Kerr, Paula Creamer and Morgan Pressel.
Paolucci’s 2010 campaign was a constant stream of top-three finishes in some of the world’s most competitive junior golf events. He started the season with a third-place finish at the HP Boys Championship at Carlton Woods held in February, moving him inside the top 10 of the Polo Golf Rankings.
Paolucci picked up his first career AJGA win at the Thunderbird International Junior, posting a 12-under-par total and claiming the title with a three-shot cushion. The win gave him the No. 1 spot in the Polo Golf Rankings.
In June, Paolucci put an exclamation point on his new position at No. 1 coming into the FootJoy Invitational with a statement-making 65 in the first round. He finished the tournament one shot back for a tie for second. Two weeks later he picked up his second title at the Rolex Tournament of Champions, conquering Blessings Golf Club as the only player to shoot under par.
Paolucci proved he has the ability to compete in high stakes match play as he worked his way into the final eight at the U.S. Junior Amateur, eventually falling in the quarterfinals. In August, he finished second at the 35th Junior PGA Championship, besting his third-place finish in 2009.
Paolucci spent a majority of his September abroad, representing the U.S. at The Duke of York Young Champion’s Trophy and competing on the U.S. Junior Ryder Cup Team. He finished tied for seventh in England and posted a match play record of 1-2-0 in Scotland, helping the U.S. to claim its first Junior Ryder Cup victory on foreign soil.
A senior at La Jolla Country Day, Paolucci is a four-time Rolex Junior All-American and has given verbal commitment to continue his golf career with the USC Trojans.
His accomplishments during the past season will be heralded Nov. 21 during the Rolex Junior All-America Awards Banquet at PGA National Resort & Spa in Palm Beach Gardens, Fla. The awards ceremony, dubbed “The Greatest Night in Junior Golf,” will also trumpet the achievements of the rest of golf’s next generation by means of the Rolex Junior All-America Teams, HP Scholastic Junior All-America Teams and Jerry Cole Sportsmanship Award.