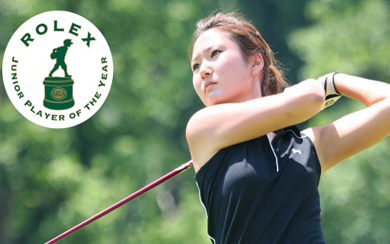 By AJGA
Park earned the right to Rolex Junior Player of the Year honors on the strength of three AJGA titles, including wins at the Rolex Tournament of Champions and The PING Invitational. She also recorded an additional seven top-10 junior golf finishes.
“I can’t put into words how excited I am for this honor,” Park said. “This year I really learned that without a passion for the game, you can’t really succeed.”
Introduced by the AJGA in 1978, the Rolex Junior Player of the Year award recognizes one boy and one girl who had the most outstanding year in junior golf events at the national level. Past recipients have gone on to become some of the most esteemed players on the PGA and LPGA Tours, including Tiger Woods, Phil Mickelson, Charles Howell III, Hunter Mahan, Scott Verplank, Cristie Kerr, Paula Creamer and Morgan Pressel.
Park’s season began with a tie for seventh at the ANNIKA Invitational and a tie for 10th at the Winn Grips Heather Farr Classic hosted by Longbow Golf Club. A breakthrough win via sudden-death playoff at the Under Armour ® / Hunter Mahan Championship in April moved her into the top 25 of the Polo Golf Rankings.
A month later, Park tied for ninth at the Thunderbird International Junior in a field that included the best juniors from around the world. She inched closer to a second title in June after posting a 66 in the final round of the ClubCorp Mission Hills Desert Junior, giving her a second-place finish, just two strokes off the winner.
Her break came at the Rolex Tournament of Champions, where she bested Emily Tubert on the Arkansas commit’s future collegecourse by a convincing four strokes. It was Park’s second title and first invitational win that helped to push her into the top-five of the Polo Golf Rankings.
Come fall, Park knew that she needed to win The PING Invitational in order to be in contention for Rolex Junior Player of the Year honors. Finding herself in seventh place after the first round, Park worked her way up the leaderboard and into position for the win. Her final-round 67 tied the course record and gave her a second invitational title.
Park had a busy September abroad, traveling to the Duke of York Young Champions Trophy and competing on the U.S. Junior Ryder Cup Team. Her year also included a Canon Cup win with her teammates of the West and a run at the U.S. Girls’ Junior Championship, where she advanced to the third round of match play.
This marks the fifth-consecutive year that Park has been named to the Rolex Junior All-America Team. A senior at Sunnyhills High School, Park has given verbal commitment to Southern Cal.
Her accomplishments during the past season will be heralded Nov. 21 during the Rolex Junior All-America Awards Banquet at PGA National Resort & Spa in Palm Beach Gardens, Fla. The awards ceremony, dubbed “The Greatest Night in Junior Golf,” will also trumpet the achievements of the rest of golf’s next generation by means of the Rolex Junior All-America Teams, HP Scholastic Junior All-America Teams and Jerry Cole Sportsmanship Award.