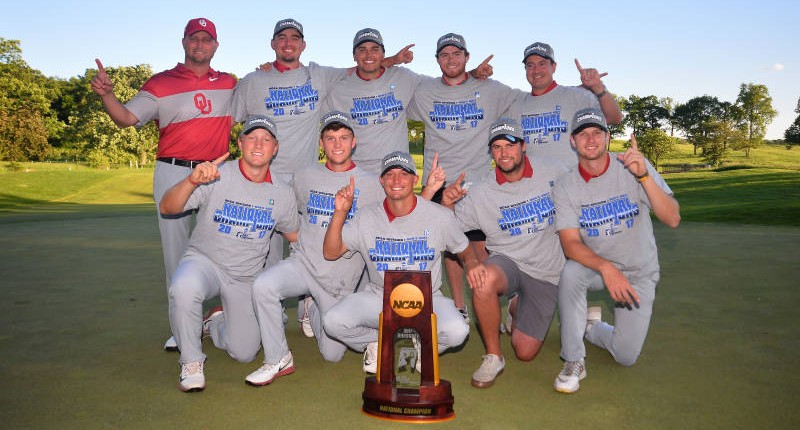 The Ducks captured their first national title by beating Texas in the final last year on their home course at Eugene Country Club in Eugene, Ore.

“I had a good feeling (this) week,” Coach Ryan Hybl of Oklahoma said. ” … If (we) had an opportunity this week, they were going to do something crazy good. This has been our best individual year. We had five individual (tournament winners), which not a lot of teams can say. The firepower was there.

” … This is so special. I’m just so happy for our guys (and) our former players that have helped build this program. This is awesome. I’m so happy.”

Blaine Hale gave the Sooners their first point in the matchplay final by defeating Norman Xiong, 4 and 3, with a birdie putt on the 15th hole, and Max McGreevy followed with a 3-and-2 victory over Edwin Yi.

Brad Dalke gave Oklahoma its winning point with a 2-and-1 victory over Sulman Raza.

“It means so much,” said Dalke, whose father played on the 1975 Sooner football team that won the national championship. “This team we have, we are all just brothers. To be able to come out here and win this thing with my guys and make the last putt to clinch it, it is so cool.

“I can’t wait to get a ring like my Dad’s. It is still sinking in.”

Wyndham Clark provided Oregon with its only point by beating Rylee Reinertson, 1 up, with an eagle on the final hole, while Grant Hirschman of Oklahoma halved his match with Ryan Gronlund.

In the semifinals, Oklahoma downed Illinois, 3-1-1, while Oregon got past Vanderbilt, 3-2.

The Sooners beat Baylor, 3-2, in the quarterfinals, while Oregon edged Oklahoma State by the same score, Illinois defeated USC, 3-1-1, and Vanderbilt disposed of UNLV, 3-2.