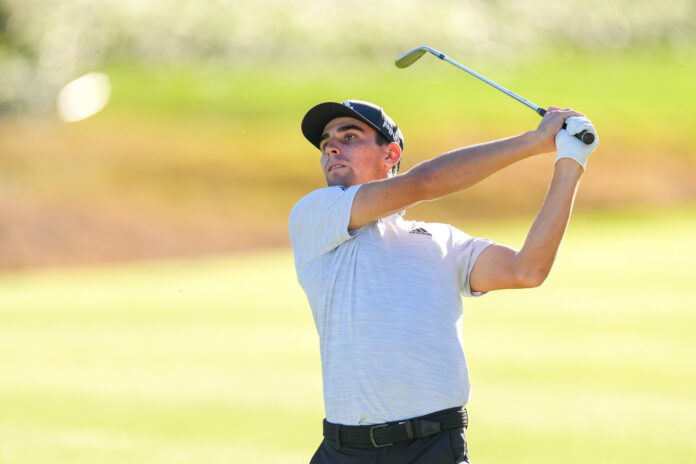 Joaquin Niemann of Chile played the best round of golf late in the day.

The 23-year-old Niemann capped his 8-under-par 63 as the sun was about to set at historic Riviera Country Club in Pacific Palisades and took a three-stroke lead over ninth-ranked Scottie Scheffler, Jordan Spieth, Cameron Young and defending champion Max Homa after one round of the Genesis Invitational.

The is the 96th edition of the event that started out as the Los Angeles Open and benefits the TGR Foundation of tournament host Tiger Woods.

“This is what we live, for, this is what we practice so much for, to have a day like today when everything goes your way,” said Niemann, whose only PGA Tour victory came in the 2019 Military Tribute at the Greenbrier. “Everything was good today.

“I’m just really happy with the way I played, and I hit a great shot at No. 5 that nearly went in the hole. It’s one of my best days on the golf course, especially at a place like this with this history.

“I have to try to keep my emotions in check and try to come back tomorrow and do the same things.”

Niemann recorded nine birdies against a single birdie at No. 12 while tying the tournament record for the opening round with his 63.

Spieth had five birdies on the back nine after starting his 66 at No. 10 and Scheffler had a tap-in eagle at No. 1, while Homa, from Valencia and Cal, holed an eagle putt from 79 feet while starting at No. 10, and Young made three birdies on each nine.

Scheffler, who won the WM Phoenix Open last week, said: “I didn’t feel much different. I think it took me a little while to kind of get going. Early pro‑am yesterday, early round today, coming off last week, I didn’t really get as much rest as I wanted to. But I’ll get some rest this afternoon.”

Said Homa about his eagle: “I never thought about making a 2. That was fun.”

Eighth-ranked Justin Thomas holed out for eagle from 22 feet on the first hole in a 67 and is tied for sixth with second-ranked Collin Morikawa of La Canada Flintridge and Cal, Charley Hoffman of Poway, 11th-ranked Cameron Smith of Australia, C.T. Pan of Taiwan and Jason Kokrak.

Top-ranked Jon Rahm of Spain shot 69 and is in a tie for 22nd that includes fifth-ranked Rory McIlroy of Northern Ireland and seventh-ranked Xander Schauffele of La Jolla and San Diego State, the Olympic Gold Medalist.’

Third-ranked Patrick Cantlay of Los Alamitos and UCLA is tied for 43rd at 70, while fourth-ranked Viktor Hovland of Norway shot 71 and is tied for 61st, 10th-ranked Hideki Matsuyama of Japan is tied for 77th at 72, and sixth-ranked Dustin Johnson struggled to a 73 and is tied for 89th.