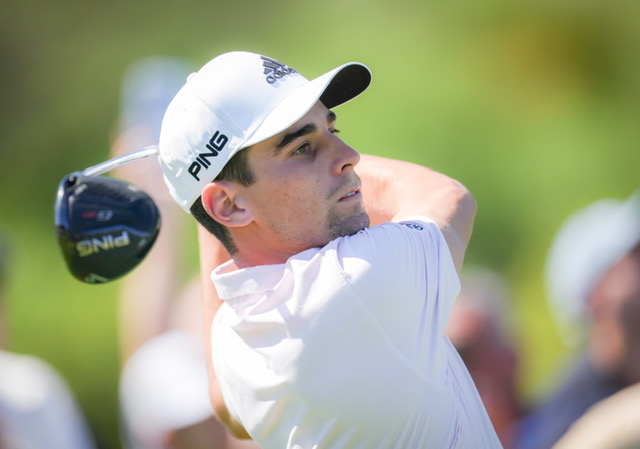 Joaquin Niemann of Chile virtually called his shot when he said after round one that he simply wanted to repeat his opening performance.

The 23-year-old Niemann carded a second straight 9-under-par 63 to take a two-stroke lead over Cameron Young, who shot 62, midway through the 96th edition of what is now the Genesis Invitational at historic Riviera Country Club in Pacific Palisades.

“We got it going pretty good at the beginning,” said Niemann, whose only previous victory on the PGA Tour came in 2019 Military Tribute at the Greenbrier and has won eight times as a pro. “I really like the way I handled myself out there. Everything is working pretty well. Obviously, I’m making a lot of putts right now. I feel I’m starting my ball online with the putter, so when you have greens this good, when you start your line, I think you’ve got a good chance of making putts, so I think that’s been big this week.

“Obviously, you play this game to try to win every week and … you know how hard it is to win here and how competitive they are, how many good players there are here. You have to be patient and just wait for my week.

“The same way I felt on Thursday, I tried to make it the same on Friday. I think I did a good job there, which I was feeling great the whole day.”

Niemann kick-started his round by sinking a four-foot eagle putt on the first hole and collected seven birdies the rest of the way against a single bogey at No. 10 while posting a 36-hole score of 18-under 126 to break the tournament record held by four players by four strokes.

Young, 24, a rookie out of Wake Forest who tied for second in the Sanderson Farms Championship, birdied six holes while finishing on the front nine, including the last four in his bogey-free round.

“I think we played it very conservatively for the most part, which is just going to limit how many mistakes we make, and I think that’s kind of the name of the game out here,” said Young, who won twice last season on the Korn Ferry Tour.

“Not all the time are you going to make a bunch of birdies. A lot of rounds you’re going to play out here with two, three and four birdies, so I think the name of the game out here is whenever you’re in a mediocre spot, you just have to get it on the green, two-putt and move on. Pars are never bad out here. Chasing Joaquin, it felt like it a little bit today, but pars are never bad.”

Eight-ranked Justin Thomas holed out from 31 feet off the fringe for an eagle on the 11th hole in a bogey-free 64 and is five shots back in solo third, while Adam Scott of Australia, who has won this event twice, finished with a bogey-free 65 and is seven down in a tie for fourth with Jordan Spieth, who chipped in for eagle on the 11th hole and made his only bogey on the last hole in at 67.

Second-ranked Collin Morikawa of La Canada Flintridge and Cal had a second straight 67 and is eight down in solo sixth, while fourth-ranked Viktor Hovland shot a bogey-free 64 to wind up nine shots behind in a tie for seventh with Russell Knox of Scotland, who holed an 11-foot eagle putt at No. 11 in a 67, and Cameron Smith of Australia, who wound up at 68.

Defending champion Max Homa of La Canada Flintridge and Cal shot 70 and is 10 strokes back in a tie for 10th with Marc Leishman of Australia, who made a 19-foot eagle putt on the first hole, and Sebastian Munoz of Colombia, who both came in at 66.

Fifth-ranked Rory McIlroy of Northern Ireland and seventh-ranked Xander Schauffele of La Jolla and San Diego State both totaled 70 and are in a tie for 31st, while top-ranked Jon Rahm of Spain had a 73 and made the cut on the number with third-ranked Patrick Cantlay of Los Alamitos and UCLA, who shot 72, and 10th-ranked Hideki Matsuyma of Japan, who wound up at 70.

Sixth-ranked Dustin Johnson, who this tournament in 2017, shot 71 to miss the cut by two strokes.