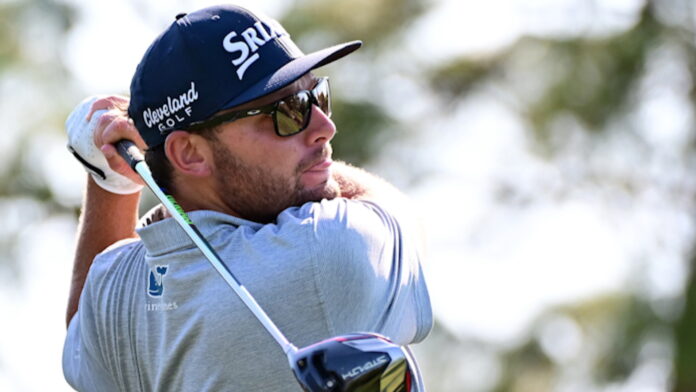 Matthew NeSmith has never won on the PGA Tour, but now he finds himself alone atop the leaderboard.

The 28-year-old NeSmith tied the course record by shooting 10-under-par 61 to take a two-stroke lead over Adam Hadwin of Canada midway through the Valspar Championship on the Copperhead Course at Innisbrook Resort in Palm Harbor, Fla.

“I’m really happy with my game because I haven’t play this well in a while,” said NeSmith, whose best result this season was a tie for 14th in the Shriner’s Childrens Open. “I’ve had a lot of failure, but I’ve played a lot of good golf the last few days. I’ve been doing everything right.

“I’ve been working on not getting ahead of myself and staying in the moment. I just want to go out there, stay calm and do the best I can, and not worry too much about what happens. I looked at a couple scoreboards out there, but I didn’t write a score down until I was in the scoring tent.

“It was a lot of fun and I’ll just go out with the same attitude the next two days.”

NeSmith, whose only pro victory came in the 2019 Albertsons Boise Open on the Korn Ferry Tour, sank an 11-foot eagle putt on the 14th hole and made six of his eight birdies while finishing on the front nine to record a 36-hole score of 14-under 128.

Hadwin, whose only PGA Tour victory came in the 2017 Valspar, started the back nine with three straight birdies and had a single bogey at No. 3 while posting a 66.

“This is the way I played when I won here a few years ago,” said Hadwin, who won four times on lower tours. “I didn’t get off to a great start today, but I stayed patient and made a nice par save on the seventh hole that kind of got me going and I made some birdies after that. I made a birdie on the next hole and made some nice birdie putts on the back nine.

“Players a scoring better on this course, but you have to stay patient around here, although this is a fun place to play.”

Scott Stallings made four birdies on the front nine en route to a bogey-free 66 and is three shots back in a tie for third with defending champion Sam Burns, who sank a 40-foot eagle putt at No. 14 to highlight his 67.

Said Burns, who shared the first-round lead at 64: “It was a solid day out there even though there was a little more wind. The scores have been low, but the course will firm up on the weekend, and in fact that started a little bit this afternoon. I just want to keep playing well and see what happens.”

Eighth-ranked Justin Thomas made five birdies on the back nine after starting at No. 10 and was rolling along until making a double-bogey 6 on the seventh hole in a 66 that left him four behind in solo fifth, followed one more down in sixth by Davis Riley, who wound up at 68.

Ninth-ranked Xander Schauffele of La Jolla and San Diego State carded a second straight 67 and is six strokes back in a tie for seventh with Brian Harman, who had a bogey-free 67, and Webb Simpson, who also totaled 67.

Martin Kaymer made a three-foot eagle putt on the first hole to kick-start a bogey-free 66 and is seven shots down in a big tie for 10th with Troy Merritt (66), Gary Woodland (68), Tommy Fleetwood of England (68), Stewart Cink (68), Louis Oosthuizen of South Africa (68), Matt Fitzpatrick of England (68), Richy Werenski (70), David Lipsky of Los Angeles (71) and Johnattan Vegas of Venezuela (71).

Second-ranked Collin Morikawa of La Canada Flintridge and Cal shot 70 and is in a tie for 38th that includes 10-ranked Dustin Johnson, who had a 71, while third-ranked Viktor Hovland of Norway sank a 36-foot birdie putt on No. 17 to finish at 70 and make the cut on the number in a huge tie for 49th.