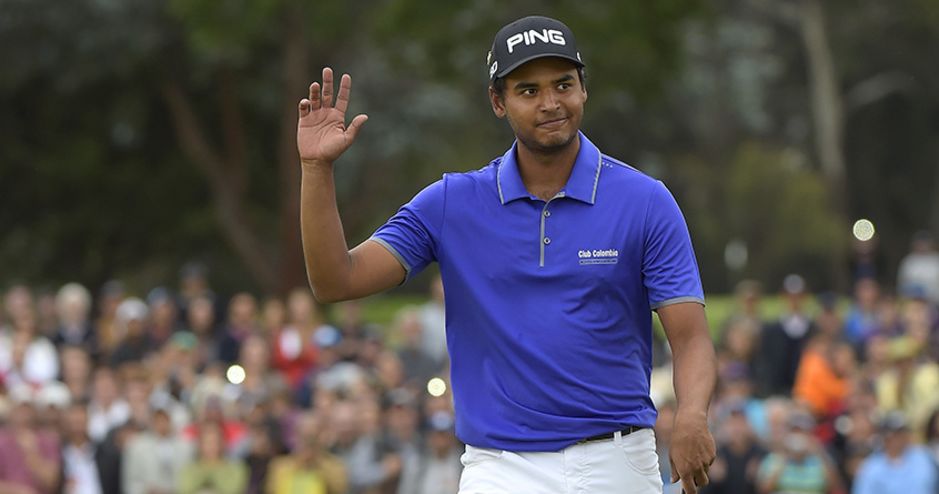 Davis Love III rolled back the clock again, but was upstaged by rookie Sebastian Munoz.

Munoz, from Colombia, shot 9-under-par 61 late in the day to take two-stroke lead over Love after one round of the Greenbrier Classic on the Old White TPC Course at the Greenbrier Resort in White Sulphur Springs, W.Va.

The 24-year-old Munoz, who has three pro victories including the 2016 Club Colombia Championship on the Web.com Tour, collected five birdies on both nines, including four in a row twice.

“Today felt really good,” said Munoz, who has missed the cut five times this season and whose best finish was a tie for 27th in the Valero Texas Open. “First thing that comes to my mind is that I had like a putting lesson with a friend yesterday, (fellow pro) Gonzalo Fernandez-Castano. He helped me figure out some stuff and it definitely worked.

“I got on a four-birdie streak, which was pretty good. And then, you know, just keep on making birdies, pars, pretty steady. … I feel like I’ve been playing pretty good since San Antonio. I mean, I just think I’ve had like four, five starts so I felt pretty comfortable.”

Love, 53, who became the third-oldest winner on the PGA Tour when he captured the 2015 Wyndham Championship, carded a bogey-free 63 that included a 30-foot birdie putt on the 14th hole and a 46-foot birdie chip on 17th.

The Ryder Cup captain last year, Love has 21 PGA Tour victories including the 1997 PGA Championship and will be inducted into the World Golf Hall of Fame in September.

“I’ve been working really hard the last couple weeks on trying to fix my swing, to kind of swing around a stiff back and stiff hip,” said Love, who has missed the cut five times in seven events on the circuit this season. “I was able to hit the fairways and greens to give myself some birdie chances, and the greens are perfect. When I did miss, I chipped in twice.

“I’ve had a lot of rounds under par here and I’m excited to play when I get here. It’s a treat to play a course like this and it’s better than it was since they fixed it after the flood last year.”

David Lingmerth of Sweden, who led after each of the first three rounds before tying for fifth in the Quicken Loans National last week, posted a bogey-free 64 and is tied for third with Xander Schauffele of San Diego, Ben Martin, Graham DeLaet of Canada, Nick Taylor and Danny Lee of New Zealand.

C.T. Pan of Taiwan recorded a 65 and is tied for ninth with David Hearn of Canada, Hudson Swafford and Robert Streb.