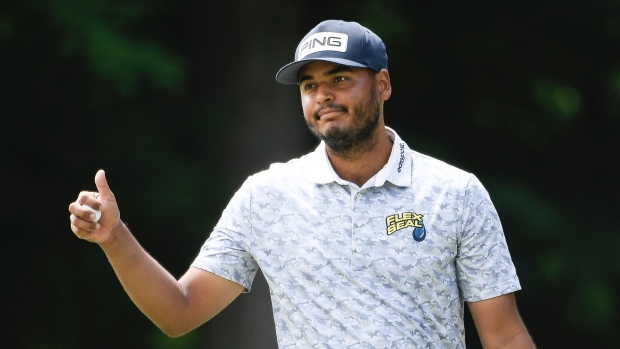 Sebastian Munoz of Colombia simply moved out in front of the crowd.

The 28-year old Munoz shot 4-under-par 67 in drizzling rain during round three to take a one-stroke lead over Brandon Hagy of Westlake Village and Cal on a jam-packed leaderboard in the 50th John Deere Classic at TPC Deere Run in Silvis, Ill.

“It’s huge,” Munoz, whose only PGA Tour victory came in a playoff in the 2019 Sanderson Farms Championship, said of his slim lead. “Every shot counts, and having every extra one for tomorrow might help me out a lot.

“We could see on the leaderboard that people were going low, and you didn’t want to kind of fade, so it was really important to birdie 11, 13 and 16 coming in. It’s really nice to be in the position I am right now.”

Munoz, who claimed his three other pro victories at home in Colombia, was tied for the lead with an opening 63 and has followed that with two 67s to record a 54-hole score of 16-under 197.

Hagy, 30, who is seeking his first pro victory, used a 303-yard drive to set up a seven-foot birdie putt on the 17th hole that moved him into sole possession of second place with his own 67.

“I used my proficiency off the tee, hitting the fairways and giving myself plenty of birdie opportunities,” said Hagy, who is averaging more than 320 yards in driving distance through three rounds. “It takes some of the stress off your game and I hope to keep doing that tomorrow. I know the nerves will be there, but that can help you play better.

“It’s definitely within my grasp. I feel like I can hit all the shots necessary to get me over the top. But the key is all these guys here can hit those shots, too, so you just have to stay within yourself, and a get few bounces here and there go your way, and we’ll see what happens.”

Scott Brown collected nine birdies in a 63 that was the low score of the day and is two shots back in a tie for third with Adam Long, who had a 64, Cameron Champ of Sacramento, who shot 65, Kevin Na of Diamond Bar, who totaled 66, and Ryan Moore, who finished at 67.

Maverick McNealy of Portola Valley and Stanford made three birdies on each nine to post a bogey-free 65, and is three down in a tie for eighth with Jhonattan Vegas of Venezuela, who had a 67, Chez Reavie, who wound up at 69, and 36-hole leader Luke List, who came in at 71.

There are 21 players within five strokes of the lead.

Steve Stricker, the 54-year-old U.S. Ryder Cup champion who has won this tournament three times, is tied for 29th after a 68.