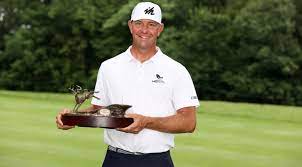 Lucas Glover remembered how to win, even though it had been 10 years since his last PGA Tour victory.

The 41-year-old Glover posted a 7-under-par 64 that was the low score of the day to capture the 50th John Deere Classic by two strokes over Kevin Na of Diamond and Ryan Moore at TPC Deere Run in Silvis, Ill.

“It’s been a long 10 years for me,” said Glover, who claimed his fourth victory on the circuit but first since the 2011 Wells Fargo Championship. “I’ve had some good years since then, but did nothing like this. I knew it was in there, but I just had to clean up my brain a little bit, go out there and hit good shots.

“This our first win as a family, my wife Krista and our two daughters. I talked with them on the phone before it became official and they were excited, and said ‘Good job.’ I have to call them again to celebrate now that it’s over.

“I’ve been playing pretty good for a while, but knew I just had to get better. I knew I could do this again and I proved myself right, and some other people wrong.”

Glover, the 2009 U.S. Open champion, made three birdies on the front nine before taking his only bogey at No. 11, but then took charge with four straight birdies and five on the next six holes en route to a 72-hole total of 19-under 265.

Na, who has won five times on the PGA Tour including the Sony Open in Hawaii early this year, had four birdies on the back nine in a 68, while Moore, the 2016 John Deere champion who has been battling back problems since last year, also shot 68.

Third-round leader Sebastian Munoz of Colombia never really recovered from two bogeys on the first three holes on his way to a 71 and finished three shots back in a tie for fourth with Adam Schenk, who totaled 67, Luke List, who had a 68, and Scott Brown, who wound up at 68.

Left-hander Hank Lebioda holed from out 35 yards for an eagle at No. 17 en route to a 65 and recorded his third straight top-10 finish as he wound up four down in a tie for eighth with Seamus Power of Ireland, who finished at 66, and Brian Stuard, who came in with a bogey-free 67.