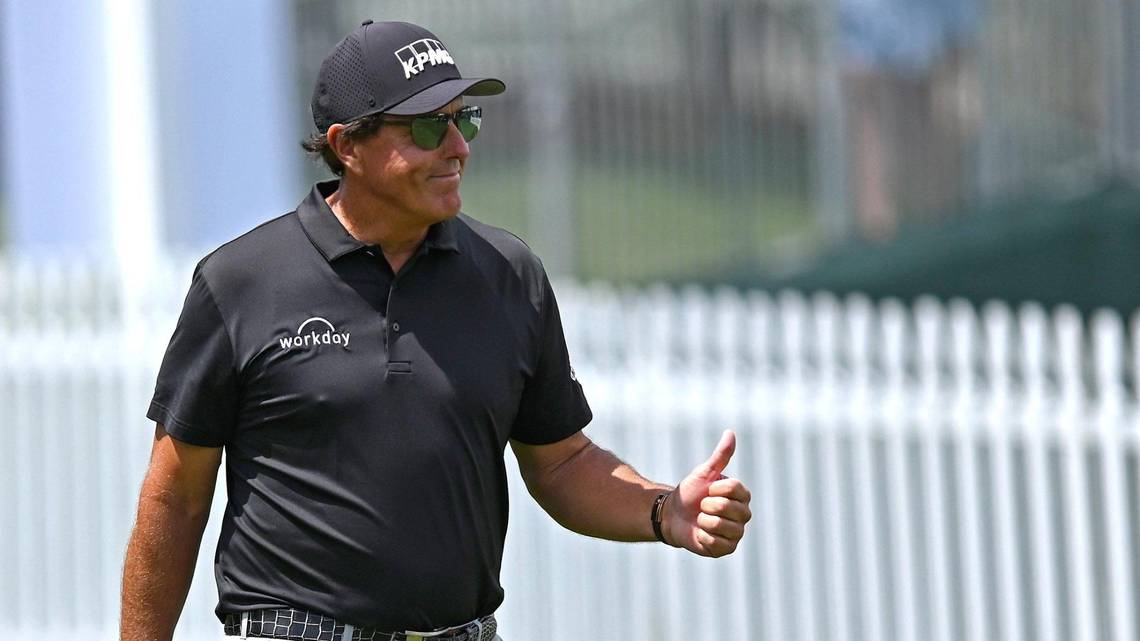 The 50-year-old Mickelson posted a 7-under-par 64 to take a two-stroke lead over Kyoung-Hoon Lee of South Korea and Keegan Bradley after the first round of the Wells Fargo Championship at Quail Hollow Club in Charlotte, N.C.

“It was a lot of fun,” said Lefty, who claimed the last of his 44 PGA Tour victories in the 2019 AT&T Pebble Beach Pro-Am, but won twice last year on the PGA Tour Champions. “I really like this golf course, it’s one of the best tee-to-green that we play and the greens are really firm.

“There are a lot of very difficult holes to make par on and then there are some that are good birdie opportunities. That really makes it a great golf course. I hit a lot of good shots, so it was a really fun day.

“The biggest thing for me was I was able to say in the present and focus on each shot. My mind has been prone to wander. I’ve had a little trouble staying focused lately and was able to do that today. But I can’t get ahead of myself and just want to go out and shoot a good round tomorrow.”

Mickelson, who missed the cut last week in the Valspar Championship, started on the back nine in the Wells Fargo with birdie-par, but then reeled off four birdies in five holes through No. 18 before adding three birdies while playing the front nine flawlessly.

Lee played early in the day and made three birdies on each nine and his only bogey at No. 16 in a 66, which Bradley matched as one of the late finishers by making two birdies down the stretch in a bogey-free round after placing second last week in the Valspar.

Tommy Fleetwood of England chipped in from 74 feet for an eagle on the 10th hole en route to a 67 and is tied for fourth with Peter Malnati, who played bogey-free, Gary Woodland, Luke List, Keith Mitchell and Kyle Stanley, who holed out from 163 yards for an eagle at No. 11.

Patrick Rodgers of Stanford made birdies on four of his last six hole to shoot 68 and is tied for 10th with left-hander Brian Harman, Sungjae Im of South Korea, Hunter Mahan, Satoshi Kodaira of Japan, Brian Stuard, Kramer Hickock and Joel Dahmen.

Second-ranked Justin Thomas is tied for 18th at 69, fifth-ranked Bryson DeChambeau shot 70 and is in a tie for 35th, and seventh-ranked Patrick Reed holed a 50-foot eagle putt at No. 7 and is tied for 53rd at 71.

Ninth-seeded Webb Simpson, who lives in Charlotte, withdrew before the start of the first round because of a neck injury.