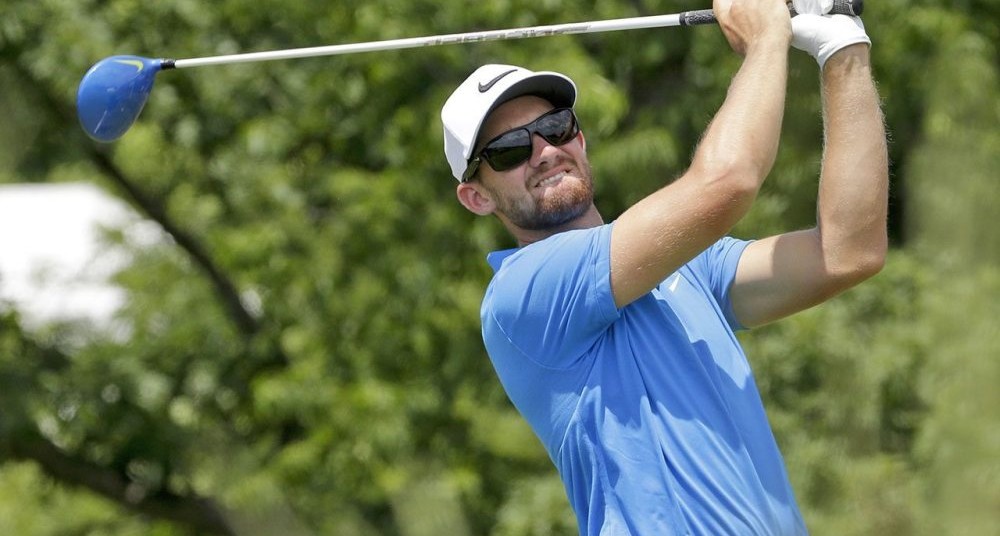 Patrick Rodgers of Stanford grabbed a share of the lead in the Wells Fargo Championship, but it was anything but a breeze.

The 28-year-old Rodgers posted a second straight 3-under-par 68 in difficult, windy conditions to tie for the top spot with Matt Wallace of England and Gary Woodland midway through the tournament at Quail Hollow Club in Charlotte, N.C.

Rodgers (pictured), Wallace and Woodland all played in the morning, before the wind really began to blow, up to 35 mph.

“There’s always going to be mistakes, especially on a golf course like this,” said Rodgers, who has never won on the PGA Tour and tied for second in the 2015 Wells Fargo Championship.

“It penalizes almost every mediocre shot. I think I probably would have like to get more out of the finish of my round. I love this golf course. I’ve been in the mix here before and I’m excited.”

Rodgers, whose only pro victory came in the 2015 Pacific Rubiales Colombia Championship on what is now the Korn Ferry Tour, sank a 14-foot eagle putt on the seventh hole in addition to making three birdies and two bogeys for a 36-hole score of 6-under 136, which Wallace and Woodland equaled.

Wallace, who has 10 pro victories but none on the PGA Tour, made two late birdies in a 67, while Woodland, the 2019 U.S. Open champion, made two birdies on each nine in a 69 a week after missing the cut in the Valspar Championship.

“Rock bottom,” Woodland said of his feelings a week ago. “Made a change, went back, talked to Butch (Harmon) on Saturday, worked with him over the phone. And then Pete Cowen was in town working with Rory, so Pete came down and we worked in person on Sunday.

“If I can’t swing like I did three, four years ago then I need to go get it fixed. If I was going to continue to play the way I was last week, then it was probably time to shut it down this week. But I’ve seen the difference why I was swinging the way I was.”

Said Wallace, who was third in the Valero Texas Open last month: “The PGA Tour is really tough. The golf courses are amazing. They’re big, the players from top to bottom can win, and so it’s very difficult to get it done. I’m just playing really nice now. Ever since Bay Hill, I’ve been on a nice stretch. I’m in a good mental space. Everything I want to achieve on the golf course, I know what I need to do to achieve that and, yeah, we’re in a good spot.”

Kramer Hickok sank a 22-foot eagle putt at No. 7 in a 69 and is one shot back in solo fourth, while Rory McIlroy of Northern Ireland, who has won the Wells Fargo twice, collected six birdies in a 66 that was low round of the day and is two shots behind in a tie for fifth with Scott Piercy (68), Keith Mitchell (71), Carlos Ortiz of Mexico (68) and Scott Stallings (69).

Phil Mickelson, who held the first-round lead at 64, struggled to a 75 and is three down in a tie for 10th with Bubba Watson, who shot 69, Abraham Ancer of Mexico, who totaled 70, and Luke List, who finished at 70.

Seventh-ranked Patrick Reed is tied for 14th after a 69, second-ranked Justin Thomas shot 73 and is tied for 41st, while fourth-ranked Xander Schauffele of La Jolla and San Diego State had three late birdies in a 71 and is tied for 51st and fifth-ranked Bryson DeChambeau made the cut on the number in a tie for 64th despite a 74.

Third-ranked Jon Rahm of Spain of Spain made bogeys on the last two holes to finish at 76-70—146 and miss the cut by two strokes, while defending champion Max Homa of Valencia and Cal totaled 77-76—153 to miss the weekend by nine shots.