McNealy Shoots 64, Up by 2 at Silverado 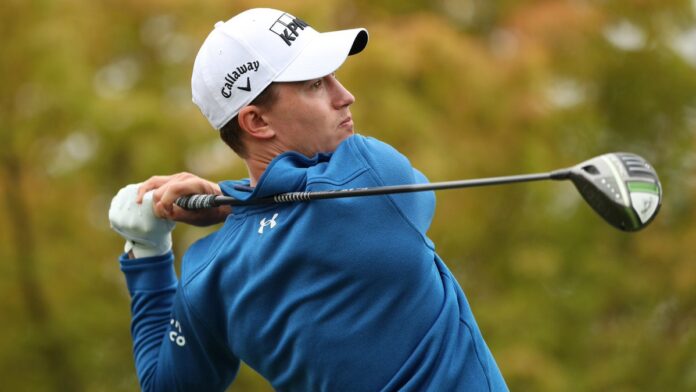 Maverick McNealy hasn’t won since he tied Tiger Woods’ record of 11 career victories at Stanford, but now he finds himself atop a leaderboard again.

The 25-year-old McNealy, from Portola Valley, holed out from 74 feet for an eagle while finishing an 8-under-par 64 on the ninth hole to take a two-stroke lead over Beau Hossler of Rancho Santa Margarita and Mito Pereira of Chile midway through the Fortinet Championship on the North Course at Silverado Resort and Spa in Napa.

“It was crazy, it was a tale of two nines,” said McNealy, who best finish on the PGA Tour was second behind Daniel Berger in the AT&T Pebble Beach Pro-Am earlier this year. “I think days like today aren’t a product of something I changed today, I think it’s a product of putting in a lot of work.

“I think my average wake-up time this summer has been between 5:00 and 5:30. I get up early, get to work, practice, work out, eat right and have been really disciplined and really focused, and I feel like I’m a better golfer than I was six months ago. But that’s a great thing because I’m swinging it the way I want to.

“I just want to keep getting better and I want to improve my game and improve my skill set to the point where I will win. Just got to keep giving myself opportunities.”

McNealy started at No. 10 and collected five birdies on the back nine, stumbled to three straight bogeys to start the front before making birdies on the next four holes and finishing with the eagle to post a 36-hole score of 12-under 132.

Hossler, 26, also seeking his first pro victory, made four birdies on each nine in a bogey-free 64, while Pereira, who had three victories on the 2018 Korn Ferry Tour, hit a brilliant approach to within two feet for an eagle at No. 5 on his way to a second straight 67.

“I didn’t try to force it and made a lot of  mid-range putts,” said Hossler, who won the Southern California Amateur in 2013 and 2014. “I haven’t driven the ball well recently as well as I usually do, but today I hit the ball in the fairway. But you still can’t go right at the hole here, but you try to hit it to within 10 to 20 feet and give yourself some good looks.

“I can hit driver here on almost every hole, which gives me a chance to hit the greens and have some chances for birdie. I had some opportunities to win in my rookie year, but just didn’t get it done, but I feel that if I keep playing the way I am that I will give myself a chance on the weekend.”

Will Zalatoris, recently voted 2020-21 PGA Tour Rookie of the Year, birdied three of the last five holes in a bogey-free 67 and is three shots back in a tie for fourth with Bronson Burgoon, who had six birdies and one bogey in another 67, and Troy Merritt, who made his lone bogey at No. 1 in  a 68.

Matt Kuchar had six birdies on the front nine and birdied the last for a 66 and is five down in  tie for seventh with Russell Knox of Scotland, who made his only bogey at No. 1 and had six birdies in a 67, and Harold Varner III, who holed a 46-foot eagle putt at No. 16 in a second 68.

David Lipsky of La Canada Flintridge collected five birdies after starting on the front nine and birdied three of the last five holes to cap a 64 and is one more behind in a tie for 10th with Tom Hoge and Peter Malnati, who both shot 66, Jim Knous (67), John Augenstein (69), Nate Lashley (70) and Scott Stallings (70).

Masters champion Hideki Matsuyama of Japan is tied for 17th after a second 69, PGA champion Phil Mickelson also had a 69 and is tied for 24th, while Brendan Steele of Idyllwild and UC Riverside, the only two-time winner of this tournament, made a 10-foot birdie putt on his last hole for a 71 and is tied for 49th.

Top-ranked Jon Rahm of Spain, the U.S. Open champion, totaled 72-71—143 and missed the cut by two strokes after suffering from a stomach ailment this week. It was his first missed cut since the Wells Fargo Championship in May, the only time he didn’t make it to the weekend last season.For complete results, visit https://www.pgatour.com/leaderboard.html