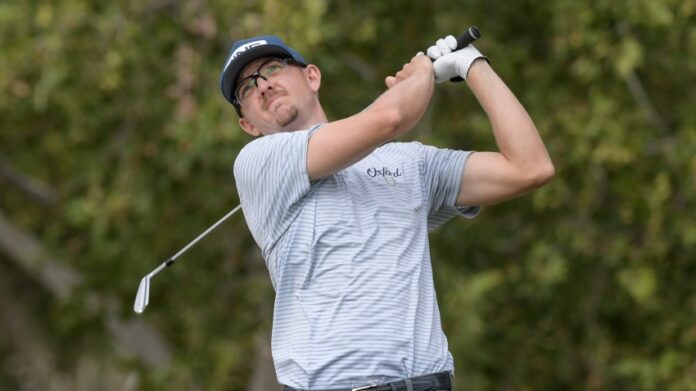 Jim Knous is playing on the PGA Tour on a major medical extension after recovering from a right wrist injury, but he’s not thinking of only regaining his PGA Tour playing card, he wants to win.

The 31-year-old Knous (pictured), who has never won as a pro, birdied two of the last three holes to shoot 7-under-par 65 and is tied for the lead with Maverick McNealy heading to the final round of the Fortinet Championship on the North Course at Silverado Resort and Spa in Napa.

“It was a great day and I really got hot out there with my putter,” said Knous, who won five times as a senior at Colorado School of Mines. “I made another nice putt on the final hole and that was a bonus. I played great and just have to remain patient in the final round. I hit a terrible drive at No. 18, but was able to make a great putt and finish with a birdie.

“I just want to hit very shot the best I can, go from there and things will work out. It was a dream start today, I kind of flattened out in middle of the back nine and then I finished strong. I just went to keep the pedal down, but I’m not going to worry about my playing status, because I want to win.”

Knous, who finished second in the 2012 NCAA Division II Championship, birdied the last five holes on the front nine, made his lone bogey at No. 12 and birdied two of the last three holes to record a 54-hole score of 14-under 202.

McNealy, from Stanford and Portola Valley, led after 36 holes following a 64 and birdied the last three holes in round three for a 70 to remain tied for the lead heading to the final round.

“It was another crazy day,” said McNealy, who has never won as a pro after tying Tiger Woods’ Stanford record of 11 victories. “It was pretty hectic on the front nine, but then I hit a good tee shot on No. 12, slowed things down and I’m really proud of my finish.

“It was one of those days where the ball kind of ended up in some funny spots, but I turned it around on the back nine and started making some putts. I had some scary lies, but I was able to get it going with the putter, making some good putts on the last three holes.

“It’s great to be tied for the lead heading to the final round.”

Max Homa of Valencia and Cal, a two-time winner on the PGA Tour and the 2013 NCAA Division I champion, collected six birdies on the back nine in a 65 and is two strokes back in a tie for third with Scott Stallings, who eagled the fifth hole in 67, Troy Merritt, who eagle No. 16 in a 69, Mito Periera of Chile, who eagled No. 6, and Beau Hossler of Rancho Santa Margarita, who both finished at 70.

Masters champion Hideki Matsuyama shot 71 and is tied for 32nd, while Brendan Steele of Idyllwild and UC Riverside, the only two-time winner of this tournament at Silverado, is tied for 57th after a 72.