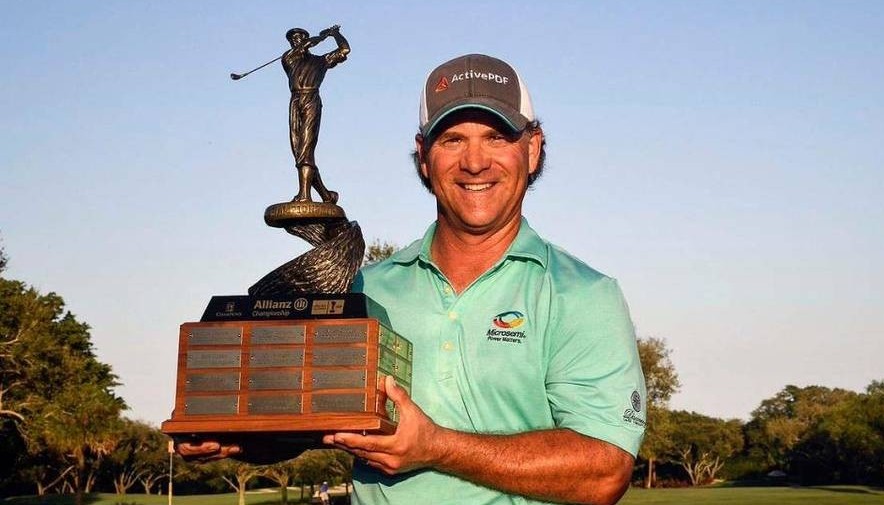 Scott McCarron couldn’t see anything but the last shot he hit on the final hole of the Allianz Championship, a six-foot eagle putt that gave him a one-stroke victory over Kenny Perry and Carlos Franco of Paraguay.

McCarron, the 51-year-old from Sacramento and UCLA, posted a 5-under-par 67 that also included an eagle at No. 7 in the final round on the Old Course at Broken Sound in Boca Raton, Fla., to claim his third victory on the PGA Tour Champions after also winning three times on the PGA Tour.

“I hit a beautiful drive right down the middle,” said McCarron, whose tee shot left him 179 yards to the hole. “As soon as I hit it, I couldn’t see it at all. The ball went right into the sun so I had no idea, but it felt good.

“I thought (the approach shot with a 7-iron) was at least inside 10 feet, and I was pleasantly surprised to get up there and see it was only six feet. … (The putt was) straight up the hill. I didn’t take much time just like I always do, and hit it. Stroked it just the way I wanted.”

Franco, who closed with a 65, and Perry, who totaled 66, each had a birdie on the final hole but came up one shot short.

Paul Broadhurst of England collected birdies on the first five holes and nine in all while shooting 64 to wind up two strokes back in a tie for fourth with Doug Garwood, who totaled 69.

Defending champion Esteban Toledo of Mexico shot 66 to finish three shots back in a tie for sixth with Fred Couples (69), Colin Montgomerie (66) of England, Kevin Sutherland (64) of Sacramento and Fresno State, Stephen Ames (67) of Canada, Fred Funk (68) and Joe Durant (70).

In their senior tour debuts, Jose Maria Olazabal (72) of Spain and Paul McGinley of Ireland (69), finished in a tie for 41st.