Lower Leads Homa, Willett by 1 After Third Round of Fortinet Championship 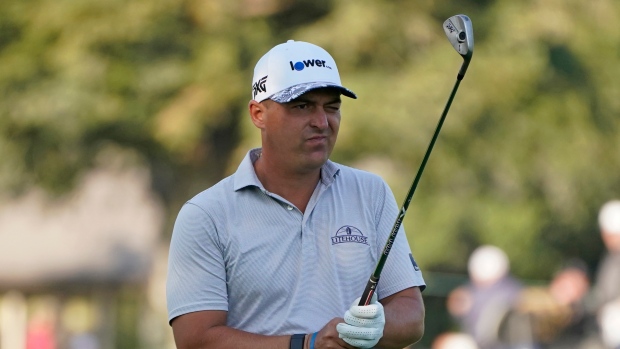 Justin Lower has never before led a PGA Tour event after three rounds and now he is looking for another first—a victory.

The 33-year-old Lower sank a four-foot birdie putt on the last hole to cap a 3-under-par 69 and take a one-stroke lead over third-round co-leaders Danny Willett of England and Max Homa heading to the final round of the Fortinet Championship on the North Course at Silverado Resort and Spa in Napa.

“This is what we want playing on the best tour in the world,” said Lower, whose only professional victories came in the Ohio Open in 2012 and 2015. “I was a little nervy on the first hole and made a bogey, but I got better after that. I just kept the ball in play and went from there.

“It’s supposed to rain tomorrow and that could make it difficult, but I have my rain gear and just want to go out there and give it my best shot. I hope it’s not too bad, but sometimes it can be pretty hard here when it rains.

“But I have a chance to win and that’s all I can ask for, regardless of the conditions. Playing on the PGA Tour with a chance to win, it’s pretty cool.”

Lower, who held the first-round lead with a 63, bounced back from two bogeys on the first seven holes of the third round with five birdies the rest of the way and recorded a 54-hole score of 13-under 203.

Defending champion Homa, who is from Valencia and Cal, had two birdies and two bogeys in his 72, while 2016 Masters champion Willett sank a nine-foot birdie putt on the last hole to also salvage a 72 on a difficult day.

“It was a real grind out there today, especially on the greens, it was tough,” said Homa, who has won four times on the PGA Tour. “That cost me, but fortunately I was able to play well enough to keep myself in the golf tournament.

“With rain coming in for tomorrow, that might make the course play a little easier although rain is never fun, but that could also mean the wind could come from a different direction and make it a little tricky.

“But I’ve played this course quite a bit and I really like it here, so I feel like I have a good chance.”

Said Willett: “It was tough when we started the day, it was really windy. It’s hard trying to hold some of the front flags when it’s pumping downwind when the area’s really small, but yes, some scrappy golf.”

Byeong Hun An of South Korea, playing in his 31st birthday, had four birdies in a 71 and is two shots back in solo fourth, while Davis Thompson birdied four of the last five holes for a 65 and is three down in a tie for fifth with Paul Haley II, who made five birdies on the front nine in a 66, Adam Svensson of Canada, who carded a bogey-free 67, and Matt Kuchar, who birdied two of the last three holes to cap a 70.

Harrison Endycott of Australia collected seven birdies in a bogey-free 65 and is four strokes behind in a tie for ninth with Mark Hubbard, who carded a bogey-free 67, Austin Smotherman, who holed a 16-foot eagle putt at No. 16 to highlight another 67, and Sahith Theegala of Chino Hills and Pepperdine, who sank a 23-foot birdie putt on the 17th hole in a 71.